Skip to content
September 8, 2003 in Filmink See more stories from this title 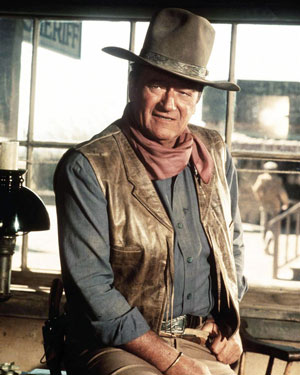 Who is the movie hero?

In discussing the stereotypical movie hero, we have to define a few terms. Firstly, despite the achievements of film industries in countries all over the world (and the fact that the feature film is generally regarded to have originated in Australia with The Story of the Kelly Gang), the modern phenomenon of ‘the movies’ is an unarguably American institution.

As such, the institution we know as the ‘movie hero’ is one that follows, champions, espouses or lives by American values. It’s the reason why America has been the most successful exporter of a national culture for the last fifty years — we all have an innate sense of the American sensibility.

The movie hero has also had a long time to establish himself (and no, that isn’t being gender specific, the vast majority of protagonists in filmed entertainment are still male). He was in fact born with popular cinema itself, when Henry Walthall formed the Ku Klux Klan to put down the black menace in history’s first blockbuster, Birth of a Nation (considered a heroic act according to the racial politics of the early 20th century).

Since then, he’s evolved but never really changed, making his way through the various fads that centred on particular genres or even stars themselves (like Errol Flynn, the archetypal movie hero thanks to his most memorable roles such as Robin Hood).

While technology, fashion and even audiences have morphed and reinvented themselves around him, he’s still up there, riding off into the proverbial sunset with a proverbial Marlboro in his mouth.

But could current world events mean the end of him for good?

Consider the heroes you’ve known and loved from the movies. Indiana Jones stared death in the face from with a one fundamentalist cult or other (including the Nazis) to secure historical artefacts. No pansy nailbrush and magnifying glass for him, he carried a whip, a revolver, and maintained all the tenderness of a wrecking ball.

Luke Skywalker wanted to escape from the boring farm where he grew up and have adventures in spaceships and snog beautiful princesses. She ended up being his sister but hey, he got to be a Jedi’

In all his movies, John Wayne epitomised the western gunman who evoked the spirit in which Americans lovingly saw themselves; pioneers in a hostile and beautiful land. All westerns are anchored in some way to that cultural ethos of colonial settlement even now, no matter what their angle.

Modern action movie heroes are uniquely American. The various slants the Stallones, Schwarzeneggers and Willis’ of the world bring to their tough-but-good guy personas embody a very American ideal; they’re caring, they know what’s right, but they’re wild as all hell, have contempt for authority and don’t mind busting heads to get the job done.

In fact, action movies have occasionally flirted with politics as their backdrop, and then they come even closer to stated American policy. Look at Schwarzenegger’s September 11 casualty, Collateral Damage, which dealt with terrorism and raised a few uncomfortable questions about American actions in Latin America.

And The Sum of All Fears, although it sensitively substituted the Islamic terrorists of Clancy’s book for Neo-Nazis, dealt with the real world, of the Israeli-Palestinian tinderbox and the global tendency to hostility in the name of defence.

But heroes who live the American dream don’t always have to win wars or kick terrorists arses. George Bailey, despite never leaving Bedford Falls and failing to achieve any of his dreams, is a hero to the town at the end of It’s a Wonderful Life because of the difference he’s made to the people in it (as shown to him by an angel).

In the film the Spielberg stable produced to venerate Capra’s vision of iconic Americana — Gremlins — the hero is shy and lovable Billy (Zach Galligan), who has to save the town from an army of ravenous little creatures and (of course) gets the girl.

And even though born in the pages of comic strips, the current fad for big screen superheroes is an extension of the original vision of those characters, under the watchful eye of their copyright holders such as Stan Lee (whom you can spot in a cameo in every single Marvel character film).

Spiderman, Daredevil, the Hulk, the forthcoming Punisher, and even as far back as Tim Burton’s 1989 vision of Batman have all appeared on screen because a director is drawn to a particular facet of their superpowers. But essentially, they’re the same thing on the surface; an ordinary man made extraordinary by fate, nature or accident who either fights for justice for the underdog or battles their own internal demons. But the result of their modus operandi is the same — they’re the type of figure we’d like to think really exists in a world where so many horrible things can happen to us or the people we love.

And the American vision of the hero is by no means restricted to America. That most gentlemanly of Cold War icons — James Bond — serves the British government tirelessly, hanging off planes, enjoying room service in first class hotels in exotic cities and bedding babes by the bucketload, and all in the name of international security. He even shags for Queen and country, as he tells the skanky ho who betrays him in You Only Live Twice.

Whatever form he’s taken — young or old, black or white, cute and lovable or hard as nails — the hero has embodied the American dream, and the dream is to be the hero. Superman reminds us of the essential tenets of the American Way; truth and justice (now the global way because of the staggering influence of American culture).

Heroes, by their definition, save the day.

The failure of the hero

America and its people have had a cushy time of it, much like we have in Australia. We’re on the side of the winners in every war, we’ve never been invaded, we’re part of the favoured political paradigm of today’s world and our country is one of the few in the world that wasn’t born amid a slaughter of international proportions.

America is the same, only more so — for half a century, they’ve been custodians of the dominant political and social paradigm on Earth. It’s been easy for them to believe in heroes that could save the day; they’ve seen heroes ride off into the sunset time and again, heroically vanquishing aggressors from the redskins to Hitler. Mongol hordes have never swarmed over the hill to rape their women and plunder their riches.

It’s hard to believe that most countries in the Middle East would have the same culture of hero worship after a millennium of one army after another overruning them.

But in the last few years, things have changed for America and it’s people. Suddenly, it’s plain to them how many people in the world hate them, their way of life and the ideals Superman, Indiana Jones, George Bailey and the Marlboro man personified.

For the first time, their enemies struck them on their own ground, and their collective sense in their own infallibility collapsed in two enormous piles of New York rubble.

After 50 years of believing in heroes, lone men and women riding around the country who can fly, save a town, kill off a skyscraper full of terrorists or fight a career-climax boxing match in Russia, where were they? Spiderman had even strung up a helicopter full of high tech bank robbers between the World Trade Centre towers months before September 11, 2001. As madmen with murderous intentions and hatred of America plotted such terrible deeds, where were the heroes to save the day?

Now, the American way of life faces a twofold problem. Besides having been proven vulnerable, it’s getting more criticism from home.

Whether academic intellectuals, dreadlocked students, writers, trade unionists, environmentalists or masked anarchists smashing Starbucks’ and McDonalds’ windows, there have never been more people who hate America at home, in the seat of American influence — the western world of the US, Canada, all over Europe and here in Australia.

As American foreign policy alienates more people around the world, more people will join in opposition to their actions, and then the situation will get really interesting.

As American actions seem unjustified and unfair to more and more people, what are their heroes going to stand for? If you believe America had no right to attack Iraq (either in 1991 or now), Afghanistan, Vietnam, Nicaragua, Grenada, Haiti or Somalia, chances are that movies which deal with those military actions (and there’s been at least one for every fight) aren’t going to wash with you because you can’t summon up any sympathy for American soldiers who should never have been there in the first place.

And now that movie heroes still ultimately serve the American dream the American government’s foreign policy claims to, we can only wonder how much we should cheer for the hero? Is he just going to get another impoverished Middle Eastern country mercilessly smashed (again)? Is he going to stop a democratic government winning office just because it isn’t pro-America, instead installing an oppressive and corrupt puppet regime? Is he going to help loot the natural resources of the Earth from their rightful owners for the benefit of the American oil or technology cartels?

Now, when we watch James Bond smooth talk, shoot and seduce his way to dispatching the despotic villain, is it going to be too hard to forget that many see Tony Blair and the government Bond has given his whole career to serve as the despot, carpet bombing Iraq for ten years while its people starve?

Who’ll be our heroes then?