Skip to content
August 29, 2016 in Moviehole See more stories from this title 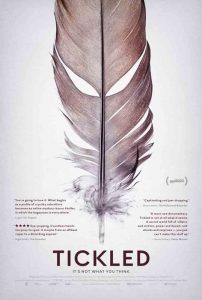 David Farrier was a broadcast and print journalist in his native New Zealand, and one of his regular gigs called for unearthing and reporting on quirky stories for network TV.

When he uncovered an endurance tickling competition in America (where men are paid to be tied up and tickled), it seemed like the kind of weird but harmless story he was used to, so he dutifully wrote off to the production company to enquire about doing a story on it.

What happened next sparked off a story of intrigue, hostility, harassment and the threat of legal action that was so strange and scary it must have felt like he’d penetrated a domestic terrorist network.

Travelling to the US to dig deeper, Farrier and his cameraman and co-producer Dylan Reeve stirred up a hornets nest of scary letters from lawyers, multiple fake identities and what seems to be a front organisation for the sexual perversions of a man very well protected by his wealth.