Skip to content
June 24, 2013 in Geek Magazine See more stories from this title 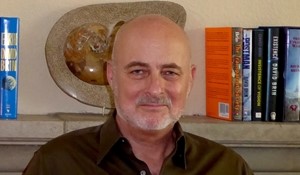 Doctor of philosophy, astrophysicist, author, optimist? How is it even possible for them to exist inside sci-fi author David Brin at once?

“I’m a bit of an optimist but I don’t think optimism is really my main character trait,” says David Brin. “I know how horrible our chances are. I’m amazed that such an awful bunch of people have actually done pretty cool stuff the last couple of generations.”

The 62-year-old author is referring to his special standing amongst the sci-fi community and now that dystopias are even de rigeur in children’s fiction he kind of stands alone.

Brin’s successful Uplift saga is about life forms helping species of lower intelligence achieve human-like abilities – and beyond. Standalone novels like 1990’s Earth and his latest book, Existence, are essentially hopeful tales of a troubled human race in technologically advanced times. The same could have been written in Victorian England about humanity in 2013, or ancient Egypt about the steam engine, but Brin’s thesis is that no matter how much of a mess we’re in, we’re still here and still doing our best.

“Civilizations are relentlessly portrayed as hopeless,” he explains about the current craze in sci-fi. “Usually if we’re in trouble we pick up the phone and call 911. The characters in science fiction don’t think to do that because the phones don’t work, or the helpers arrive late, or they’re incompetent, or they’re in cahoots with the bad guy.

You have to keep your hero in jeopardy to keep the reader turning pages, and that’s difficult if skilled civil servants from a working civilization rush to their aid so most writers and producers have to assume nothing’s working.

“But now and then you get a movie or book where the writer knows the civilization has flaws and makes mistakes but is filled with good, skilled people. So how then do you keep your characters in jeopardy?”

Good point. And what’s the worst example he’s seen in contemporary sci-fi? “The worst example was in Star Wars. The Republic is never shown doing a single thing right. The Jedi Council never does anything right. They always obey Yoda and never listen to the wise one. I’m going to offend some of your audience but I consider Yoda one of the most evil, horrible characters in the history of fiction.”

Brin also tells a very different story to the oft-retold Promethean myth, that our own inventions will be our undoing. In Existence, augmented reality glasses that have become standard enshroud reality with endless layers of information from the wares inside a store to constant news and communication feeds.

There’s no alien invasion, ruined landscape or desperate struggle against tyranny. Just like real life, Existence is about amazing tools that work in a society that functions while we try to find our place in the universe.

Ironically, Brin’s one of the few sci-fi authors who isn’t scared of technology (or wants you to be). Why are we so afraid as a society? “I don’t think it’s ‘we’,” Brin answers, referring to his readers and contemporaries.

“Millions of our neighbours are. In the United States we’re having this culture war. It’s primarily propelled by ‘old Rupert’, he and his desert sheik co-owners of Fox News are pushing this notion that scientists, diplomats, economists, civil servants intellectuals and people who know stuff are the enemy. I’m not really so sure what to do about it except try to ease those fears, treat people like adults and hope they’ll respond eventually.”

And to suggest that a mere science fiction novel can change the world isn’t as outrageous a claim as it sounds. As the author says, books have done it before. “The greatest science-fiction novels are the self-preventing prophecies like 1984 or Brave New World. They terrified us so much with plausible failure modes that millions of people guarded themselves to prevent those worlds from ever happening.”

What about the flipside of the warnings we find in science fiction – prophesy? Brin excels at it so much there’s a fan made Wiki page that tracks the accuracy of his predictions. In today’s world where Twitter and Facebook feeds are now mainstream and Google Glass is a reality, the technologies of 2048 in Existence feel all too possible. One of his best works, Earth, gave a startlingly accurate depiction of a worldwide data network accessible from any computer. It looked and sounded like the World Wide Web, and Earth was published in 1990, six months before the web as we know it even existed.

But to Brin, sci-fi isn’t about prediction but our way of life. Existence depicts a growing movement called renunciationism, where our fear of the damage we’re doing to the world and ourselves encourages a mass retreat from technological advancement. It can be attractive in a world where game changing technologies come ever faster, but Brin’s determined that’s not the answer.

“The civilizations that came before ours had horrible statecraft,” he says. “They made more mistakes than we did. We need to charge forward in hopes that we can solve enough problems for our much smarter grandchildren to make the world better. The only way we can do that is by exploring, poking the trail, navigating the land mines and evading them with agility. So far we’ve gone further than anybody could have expected given how nasty and stupid humanity has been in the past.”

Who remembers the howlingly-derided 1997 film The Postman, starring Kevin Costner? It depicted a post-apocalyptic America of the near future where a drifter finds a bag of mail from before society’s collapse and, in delivering it, reconnects the scattered remnants of civilization and restores hope. It was based on Brin’s 1985 novel of the same name, and the story of how it came to the screen is one of tortured wrangling and egos we come to expect from Hollywood (Brin says in an essay on his website that original screenwriter Eric Roth went ‘out of his way to reverse every moral point of The Postman’).

After dozens of rewrites, Costner and screenwriter Brian Helgeland came on board, and Brin is happy with the result, citing cynical critics and the juggernaut release of James Cameron’s Titanic as the reason it bombed.

But given Hollywood’s fickleness, have any slick agency story editors or cigar-chomping producers come calling since? “There are nibbles all the time,” Brin says. “But Hollywood has become the most craven and cowardly place on the planet. There were maybe two or three original movies in the last five years.

“But it’s also the darkness before the dawn. We’re going to have all the motion capture and Avatar-style movie tools, and a small group of maybe six or seven guys sitting at a keyboard with a writer at the centre will be able to make a high quality 90 minute animated story, and it’ll make money. And Hollywood will be appalled by how the story and dialogue will make something people will prefer to watch over something stupid that cost $87 million in special effects. I’m looking forward to that. That’s why I’m trying to stay healthy enough to live to be productive during that era.”