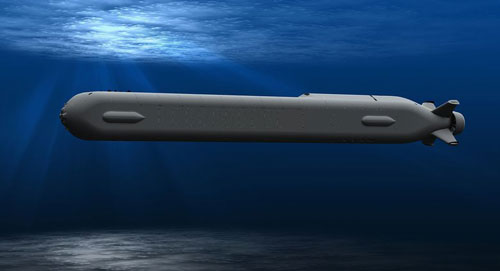 Boeing’s Orca is set to change the face of US undersea battle-readiness. Drew Turney reports.

There’s no doubt drones are becoming lynchpins in the future of US warfare. Barack Obama authorised 506 drone strikes as President, 10 times more than his predecessor, George W Bush. Donald Trump authorised three on his first weekend in office

So far the attention – and controversy over the dehumanisation of war – has been on unmanned aerial vehicles (UAVs) rather than seagoing craft, but with the Orca we’re entering the age of the XLUUV, the Extra-Large Unmanned Underwater Vehicle.

At first glance, drone submarines make sense. We all remember movies like Das Boot, Crimson Tide, The Abyss and news about the real-life 2000 Kursk submarine disaster. Even without the claustrophobic horror of battle or danger so far below the waves, submariners often talk about the cramped, sweaty conditions with little privacy or free time.

Unmanned submarines are not only deployable in far more dangerous waters, they’re ultimately disposable. And without all those life support systems, they seem to be far cheaper. Boeing, the company contracted by the US Navy to provide four craft under the Orca program, are charging just US$43.2m. The workhorse of America’s undersea fleet – the Virginia-class sub – cost as much as $2.4bn each.

An echo of the past

Unmanned submersibles actually predate UAVs by decades. The first was developed at the University of Washington in 1957, and since then unmanned submarines have taken almost every form, come in almost every shape and size, and done everything from scientific research to mapping the seafloor for oil and gas prospecting.

But the Orca will be in a class all its own. It’ll be based on an earlier craft from Boeing called the Echo Voyager, a 50-ton missile-shaped craft the company said was a test case for further development.

Like the Orca will, Echo Voyager runs on a hybrid combination of batteries and marine diesel generators and can be deployed and recovered from a pier – removing the need for a launch and support ship in dangerous or hard-to-reach places.

Land-based crews (think of the shipping containers of drone pilots outside Las Vegas blowing up Al Qaeda training camps 12,500 kilometres away) can control the fleet, issuing orders on a set-and-forget basis. Although Echo Voyager ran under its own steam for a few days at a time under field tests, it can self-direct for months.

Orca will likely use Echo Voyager’s inertial navigation system, using accelerometers and gyroscopes to calculate its position, orientation and velocity. Depth sensors tell it how far down it is, and it can surface to get a fix on its position via GPS and both send and receive findings, orders and other data via satellite.

Boeing talked about Echo Voyager suiting its entire customer base, from research to military and beyond, and even though Orca will be a warfighting tool, it will use the same modular design as its predecessor. It can carry equipment weighing up to eight tones in the cargo bay, and there are also dongles to attach other instruments or weapons to the outside of the hull.

Whether you’re testing the extent of an oil spill, deploying a mine in a hostile port or any number of other tasks underwater, the the hardware/payload system and open software architecture means you can not only configure the Orca for very different purposes, you can redeploy it for another application quickly.

For the US Navy, that means ‘mine countermeasures, anti-submarine warfare, anti-surface warfare, electronic warfare and strike missions’. That covers a lot of ground (or sea, as the case may be), from launching missiles to finding enemy ships by sonar to reporting their positions to nearby forces.

Along with other self-directed submarines, the Orca actually make more sense than unmanned aircraft in a way. Whereas communication isn’t an issue in the air, the physics involved in underwater travel imposes several stumbling blocks.

For one thing, water distorts the transmission of radio signals – if you’re in a dry airspace even a few metres down your mobile won’t work – so operators need confidence the craft is following instructions (or figuring out the best way to do so by itself) without being able to communicate or report on progress.

It needs the autonomy to detect and avoid contact with objects that could damage it – anything from a large rock on the sea floor to a passing whale. And as far back as 2012, the US Navy knew it didn’t have a power source that was safe enough to be used while surrounded by high pressure salt water (a problem it expected to solve by 2017). Lastly, the powers that be wanted a multi-talented platform – one UUV that could perform 10 tasks rather than 10 craft doing one task each.

The Orca is scheduled for delivery by June 2022.