Skip to content
June 25, 2012 in Penthouse See more stories from this title 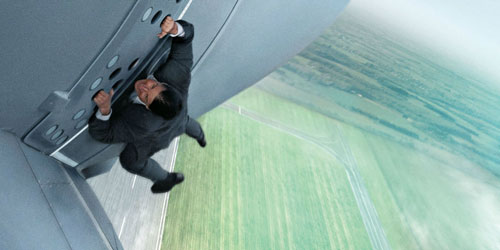 Stuntmen are getting killed and injured on film sets more than ever. Isn’t the art of a stunt performer only supposed to look dangerous? Drew Turney asks some seasoned vets and new blood if you can still expect to leave the game intact.

The last few years have seen several high profile accidents leading to hurt or dead stunt performers on films as varied as The Hangover Part II, The Dark Knight and Harry Potter and the Deathly Hallows. In early 2011 the Independent newspaper was asking whether something was wrong, quoting a spokesperson from Equity (the UK actors’ union) who said insurance claims from stunt accidents were rising. Downward pressure on film costs, a rising culture of automation the culture of blame are all taking their toll.

Veteran British stunt coordinator, performer and second unit director Vic Armstrong says stunts are inherently dangerous no different than car racing or parachuting. The 65 year old, best known for his work on many James Bond and the Indiana Jones films, said sometimes things just go wrong. “It doesn’t have to be anybody’s fault but there’s an inherent risk in any stunt.”

But he’s quick to point out that planning with safety in mind is the key. “It should be a long and exciting life but it shouldn’t be any more dangerous than any adventurous sport if you approach it correctly.”

The task of the stunt team is to make actions that look dangerous safe to execute, planning the set-up and logistics (stunt co-ordinator), dressing up to take the fall or bullet (stunt performer) and often directing the second unit, a place of long waits and armies of technicians which often captures a mere few seconds of footage.

It’s an evolving art. In his book The True Adventures of the World’s Greatest Stuntman, Armstrong describes being asked to ride in a motorcycle sidecar for 1968’s Subterfuge, assuring the director he could even though he’d never used one in his life. They muddled through and got the shot, but he says it would never happen with today’s endless red tape and clearances.

But Australian stunt performers are determined to keep safety the top of the priority list as well as fostering a can-do spirit to solving creative problems. As stunt performer and safety supervisor Reg Roordink (Romper Stomper, McLeod’s Daughters) explains, “I never say ‘no we can’t’. It can all be done if we put the right procedures in place.”

The problem stunt people face is ironically the one that’s supposed to be making it safer – too many cooks spoiling the broth. Grant Page is an elder statesman of the Australian stunt industry, now in his 70s and still at it. He drove the Nightrider’s car through the caravan in Mad Max’s (1979) opening scene and a few days before Penthouse caught up with him Page had been dressed as Hitler, set on fire and jumped through a window for the SBS series Danger 5.

“It’s when the output is taken away from the individual and put into so many other hands things can go wrong, when you rely on technology more than your own spirit,” Page says. “Physics doesn’t change and inertia, friction and momentum are the way we work out how a physical action will come out – that’s how we make it safe. What’s changed is that we’ve introduced so many other factors controlled by people whose arse isn’t on the line.”

And while it might be tempting to think stunts are for young-uns and shuffle older performers out to pasture, guys of Page and Armstrong’s age have a huge ace up their sleeve that can help ensure the safety of the whole industry. “I’ve got to admit I’m not physically as capable of really high energy stuff as I was 30 years ago,” Page says, “but experience replaces a lot of that energy so you don’t have to try as hard to get it right. The good thing about the aging process is you never let go of the knowledge you’ve developed, so less is likely to go wrong.”

But the digital age means audiences are demanding ever-bigger thrills. Even Tom Cruise was prepared to dangle from straps halfway up Dubai’s 830-metre high Burj Khalifa tower. Each director wants to top that last one but now we’re expecting feats of superhuman ability, could we be asking too much of the men and women who have to put them on screen?

33-year-old Kiwi and frequent Tarantino collaborator Zoe Bell has seen the limits of technology take over what the human body can do, and she thinks it’s an extreme we’ll always chase. “Anything we feel like we don’t have a handle on we’re going to create technology to push a bit further,” she says. “We’ve got CGI so there’s lots of things you’re not going to use humans for because they would probably kill us. We just want to see bigger and better stuff all the time. That’s just humanity, not the stunt industry alone.”

Safety concerns also change in the stunt industry because the kind of work changes with the tastes of filmgoers, as Bell explains. “I’m in the generation that started in the martial arts and wire work era around the time of The Matrix, it was a more precision-based art. The older guys were from the era of westerns and cowboys and did a lot of horse riding, brawling and jumping through stuff. Plus if you go back that far in time I wouldn’t have been allowed to do what I’m doing because I’ve got boobs!”

But however the stunt industry is shaping up, it seems Australia is where it’s at when it comes to both safety and a workmanlike approach that gets great results. “I love working in the industry here,” Grant Page says, “we don’t have the big money America has and it’s actually very limiting for them because they automatically throw money and technology at a problem. In Australia we come up with innovative ideas and we’ll always have an angle because we don’t have too much money. People think that’s a bad thing but the lack of money has made us come up with some great stuff.”

Because as any entertainment lawyer knows, more money attracts more interests, which has left the US industry drowning in red tape. “We’ve always been very conscious of safety,” Vic Armstrong explains, “but nowadays it’s all about filling in forms and laying the blame on someone else and very little about being safer. I prefer the older days when it was more free-wheeling, but it’s just something that’s crept into the business the same as it has in all our lives.

Though Armstrong’s term ‘free-wheeling’ sounds like an invitation to disaster, Page adds that it simply means we should be going back to an era not of less caution, but caution where it counts. The stunt, he believes, should begin and end with the stuntman and not the insurance assessors.

“You’re virtually instructed like a learner driver in some of the American car rolls now with the big ramps and all the technology to back it up,” he says, “‘drive here, turn left there, push that button when you get to the yellow line and hang on’. Sure you get a big result but you’re not feeling it because it’s not natural.

“In the old days, all we had was ourselves. We’ve gone out there and rolled cars, set ourselves alight and jumped off buildings. And we knew that if we didn’t have our arse covered we weren’t going to get through.”

When it came to the jaw-dropping Mad Max opening stunt, Page explains how the tiny crew built the ramp to launch the jump from timber, rocks and bricks they found in a nearby paddock. “If it was an American film there would have been engineers signing off on the ramp and it would have got so complex little things would have gone wrong,” he says. “We stuck that ramp together virtually with our finger in the air to feel where the wind was coming from,” he says. “It was done on feel.”

The True Adventures of the World’s Greatest Stuntman by Vic Armstrong
RRP $37.99

As well as a working stunt co-ordinator and performer, Reg Roordink is a safety supervisor with the Media Entertainment and Arts Alliance, the Australian union that covers the film industry.

He says Australia’s at the ‘forefront’ of stunt safety. Every production the MEAA’s involved with gets an expert like Roordink on set to complete a safety report and breakdown of every scene involving stunts or safety hazards, even common traffic.

In the age where any kid with a pocket camcorder can shoot a story and end up a Hollywood director, the path to a legitimate stunt career is much more regimented. “There’s a grading process we have to go through,” Roordink explains, “we do 50 days on a film set on small set pieces, for example, then there’s a step up to the next grade.”

Roordink says although a lot of documentaries are out of the MEAA’s control the Alliance is ‘all over’ major productions. “Even the Americans don’t have the kind of regulations we have,” he says. “Our crews are much more aware that safety starts with them.”