Skip to content
May 17, 2008 in Empire See more stories from this title 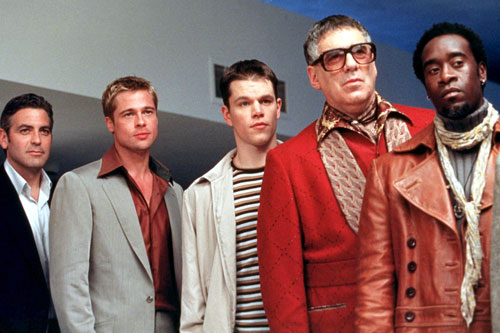 They break the law, lie, cheat and steal. What else but the movies could make the bad guys the heroes? They’re mostly at home in comedies or films with comic elements, because while we know there are guys out there who can crack safes, launch computer viruses or deal drugs, they’d never act against the innocent …would they?

They’re also very different from the villains we can’t help but like (Jack Nicholson’s Joker, Gene Hackman’s Lex Luthor) but who we know have to fail at the end. Below for your consideration then are the good guys in shady dealings — the moral balance firmly in their favour thanks to the much worse criminals they’re inevitably up against.

Gal has a grand life soaking up rays on Spain’s Costa Del Sol with his beautiful wife and two best mates, living off the ill-gotten gains a former career saw him purloin from London’s banks and jewellery shops. When inexplicably terrifying bagman Don Logan (Ben Kingsley) comes to recruit Gal for one more job, he wants nothing more than to refuse and enjoy his retirement. But you don’t say no to Don.

If there ever was a political statement that the end justifies the means, Nottingham’s favourite son is it. His entire modus operandi is to break the law, and he’s the rakish highwayman of a thousand bodice-ripping fantasies and an allegory for the fight against official corruption all in one.

Unlike Michael Caine’s other famous criminal persona, wandering the streets of Newcastle wearing only a large shotgun, Croker & Co are in it for the money. The concept is as high as the payoff — engineer a traffic jam the likes of which Turin, Italy has never known to allow a fleet of minis carrying the loot free access. How could a jury possibly put Benny Hill’s mild-mannered, fat booty-obsessed computer expert behind bars?

It’s the rites of passage that define every young man’s life — his first car, his first time, his first fake ID to buy alcohol. When Seth (Jonah Hill) and Evan (Michael Cera) need the demon drink to impress at a party, it’s up to nerdy Fogell to trick his way past the liquor store clerk with the unlikely titled ID issued from Hawaii. Luckily for him the store gets robbed.

A dubious moralist about the line between good and bad guys, Tarantino could never make a film where the criminals pat kitty cats and buy sweets for their kids. When the heist we never see goes wrong, Mr White (Harvey Keitel) thinks nothing of blowing away two cops, but he’s also taken rookie robber Mr Orange (Tim Roth) under his wing and there he stays, slowly bleeding to death until the reveal in the final frame.

Proof that we all love a comedian. Two of cinema’s most memorable, quotable and lovable slackers spend most of their time standing in front of the Quick Stop and later Moobys talking shit (in Jay’s case, at least), rapping and getting high, even agreeing to bankroll a new convenience store for Dante (Brian O’Halloran) and Randal (Jeff Anderson) just so they can stand outside it in peace. It’s just so easy to forget they’re drug dealers…

It’s easy to forget that the word ‘vigilante’ means an individual or group who takes the law into his own hands without judicial or executive authority, not a crusading hero cleaning up the streets. Just like Dirty Harry, Rambo and a hundred republican-era heroes after him, Batman shoots first and asks questions later with no due process of law or trial. Sure, Gotham City would implode without him, but if you’re talking legality over morality, he’s worse than Joe Chill, The Joker and rubber nipples put together!

A sore point in the geopolitical world? If those rotten commie/terrorist/Arab/alien/insert-evil-stereotype-here bastards have developed technology better than ours, it gives the West a moral right to sneak in and snatch it. While the authorities catch and slaughter his moles all around him, Gant strolls into a hangar representing the violent, incompetent Soviet regime and makes off with their top-secret jet fighter. In today’s world where the US government is so frequently the bad guy, Gant is the embodiment of lawless unilateral action.

Recently released from jail for his last heist, Doc (Steve McQueen/Alec Baldwin) has no higher ideals but the pursuit of loot and love for his wife Carol (Ali McGraw/Kim Basinger) — and even that’s strained at times. But when sprung by a corrupt sheriff intent on a set-up and with a fearsome former partner on his tail, the stakes are higher than usual. Wildman Sam Peckinpah’s thriller has virtually the same structure and characters as Bonnie & Clyde, but with much worse felons tracking them down, you just know the McCoys are going to get away with it.