Skip to content
July 4, 2013 in The West Australian See more stories from this title 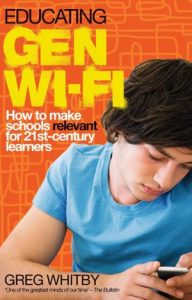 The technologies and resources our kids today have at their disposal are changing everything about their lives. But Greg Whitby doesn’t believe education is one of them, and he thinks it’s causing a problem.

In Educating Gen Wi-Fi, Catholic Schools Diocese of Parramatta executive director Whitby contends that, where schools were once about curating information according to a curriculum, today children live in a world where information is all around them, and that teaching should be about context rather than memory by rote.

Technology, Whitby says, is an enabler, and we should make it available to help not just students but teachers to encourage thinking critically rather than just remembering facts to regurgitate in exams.

In a world as highly politicised as education, the notion of more technology is fraught with emotion, constantly in danger of rising to hysterical ‘won’t somebody think of the children?’ levels in our social debate. On one hand, the Internet is the biggest resource that’s been bestowed on the classroom since the blackboard. On the other, fears that our kids are Facebooking, sexting and cyberbullying themselves into early therapy run high.

To Whitby, it’s not about – as he puts it – turning them loose and letting them ‘Google and game their way to an education on their own’. “We’ve never needed better teachers than we do today,” he says. “The best ways of teaching will always be based on an understanding of how people learn. An essential feature of a successful school today is the concept of a learning community where teachers and students are essentially learners, seeing learning as a major task of everyone.”

Of course, one thing politicians (more so than voters, curiously, whom study after study has shown would pay more taxes if it went to things like education and health) can be counted on to carp over as soon as there’s any wind of change is cost. But Whitby says his ideas aren’t about more money, teachers or computers. “We have finite resources with competing priorities,” he says.

The secret to technology access is actually in the book’s title – students today are surrounded by more information-delivery devices than they possibly concentrate on as it is. In fact, we’re all aware of school as an environment of restricting technology – Whitby talks about one extreme example in the US where students hand their phones to a security company at the school gates to be left in a locked van all day.

The secret, he believes, is not in cutting technology off, but using it the best way. “Schools are already shifting investment from textbooks to digital assets. Students and staff are now using their own technologies in school. Teachers just need to be open to doing things differently.”

Talk to any high school student struggling with a subject like proof by mathematical induction or particle physics. Unless they want to be a mathematician or a particle physicist, they’ll likely wonder about the point of learning stuff to spout on an exam paper and forget as soon as they graduate?

One of the most interesting ideas in Educating Gen Wi-Fi is Whitby’s reference to a fascinating fact – ten of the top jobs in the information economy today didn’t even exist when the people working in them were at school. The prospect is not only a little frightening for policy-makers, it seems to render the whole institution of education redundant. Above the pivotal three R’s, what can we possibly teach generation wi-fi that they’ll have any use for?

“It means our understanding of what ‘knowledge’ means has changed,” Whitby thinks. “It’s shifted from a model where information was transmitted and memorised to a model that teaches students to understand concepts, think critically and solve problems creatively. If we can empower students to become independent learners then they’ll be capable of learning and re-learning in a changing world. The only answer is to teach them how to respond.”