Skip to content
August 31, 2015 in Moviehole See more stories from this title 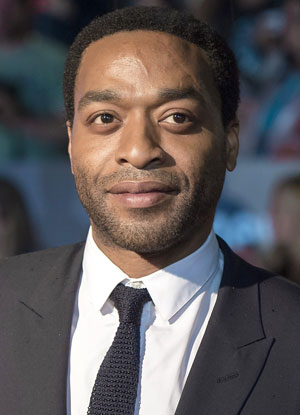 After a big early splash in Serenity, Chiwetel Ejiofor seemed to fade away somewhat, disappearing in fluffier fare like Roland Emmerich’s 2012 and Spike Lee’s Inside Man.

Then he grabbed the attention of the world again with the searing 12 Years a Slave, and now the 38-year-old Londoner is centre stage again, soon to appear in Ridley Scott’s The Martian, the high profile American remake of Spanish hit Secret in Their Eyes and Marvel’s Doctor Strange.

But first, he plays one of the last three humans left alive in Craig Zobel’s (Compliance) interpretation of classic end-of-the-world novel Z For Zachariah. As scientist John Loomis, he finds solace in a river valley untouched by the radiation and occupied by young, trusting and God-fearing farm girl Anne (Margot Robbie) before the balance is tipped by the arrival of mine survivor Caleb (Chris Pine).

Ejiofor (pronounced Chew-eh-tell Edge-ee-oh-for) talked to Moviehole.net in LA about the end of the world, future projects and the one place in the world where he doesn’t have to spell his name.

Do you consider John to be the villain because of his ultimate actions?

He definitely doesn’t see himself in that way, that was always the thing about all the characters. They’re committed to the idea of them having this goodness, which I think is the way Loomis looks at himself. Obviously the gap between how somebody sees themselves and how they actually are can be embarrassingly wide and maybe that’s what he suffers from.

He definitely thinks that all of his decisions are made with the right kind of attention, that circumstances have moved beyond his control at some point. He’s much more cerebral and thinks that’s the way to survive. It doesn’t work in all circumstances.

Is that character dynamic what appealed about the project?

I had a great conversation with [director] Craig Zobel. I’d always been interested in the idea of doing a two or three hander.

I thought it was a fascinating thing to investigate how that tension can be rattled up without much else going on – just circumstance and an individual. Craig and I had a lot of conversations about John Loomis and his nature, his psychology, and to put that guy and that psychology in this circumstance with these people to see how that plays out is really interesting.

Also, I love Craig’s film Compliance so I was very excited to work with him.

Do you build an inner life for your character just for your own purposes or process?

This is one of those where you have to figure out who he was from the ground up and build that inner world, understand what has happened to him and what he’s seen, what he’s done. Some of the details of what his last year must have been like underground working with the radiation suit and the details and frustrations of that. I felt like I had to know him a little without him having to tell you everything about him.

He’s a pretty handy guy in the film. Are you in life?

Not at all. Post-apocalyptic landscapes are not part of my skill set. I wouldn’t be much good. Born in London, know what I mean? I think you need a slightly more rural quality.

It also leaves a lot to viewer interpretation, especially at the end. Did you like that about the script?

Yeah, it deals with really big ideas, but in a really intimate way. Like Compliance, it has a kind of epic quality to its psychological landscape, but it’s actually played out in a small way. I love that.

There are strong themes of faith and science clashing.

Yeah, of course those things can coexist, but Loomis is definitely 100 percent an atheist. He’s doubled down on those principles and being locked into one thought process also corners him a little bit. When Caleb turns up he’s able to outmaneuver Loomis just by being front footed, less cerebral and more engaged with the world and life. Loomis isn’t quite able to outmaneuver him.

How does that inform on the ending?

I thought the end of the film was the conclusion Loomis, in spite of himself, would come to. By the end he feels totally outmaneuvered and he can’t get himself out of this situation, he can’t science his way out of the emotional rut he’s finding himself in.

At some point in the film the two of them recognise there’s probably only one outcome, that the situation of the three of them is not going to last to the credits.

What was the appeal in the Secret in Their Eyes remake?

How sick do you get of spelling your name to people?

Like anything else, you get used to it. Embarrassingly I was in Calabar in the southeast of Nigeria making Half a Yellow Sun. I was travelling back to America and putting my bags on the counter and the airport lady asked my name. I said ‘Chiwetel Ejiofor… c-h-i’.

She stared at me like I was insane and calling her an idiot, like I was spelling ‘John’ or ‘Michael’. She looked at me and said, ‘I know how to spell Chiwetel’. I suddenly realised I’m so invested in that idea that my name is really complicated and I forgot it’s not. It was the first time I tried to spell my name to a Nigerian woman.