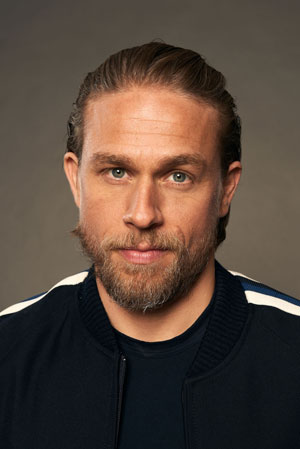 He’s ‘that guy from that movie’, with small roles in films from Nicole Kidman/Jude Law weepie Cold Mountain and Elijah Wood’s British soccer hoodlum film Green Street Hooligans to Children of Men and this year’s nobody-saw-it Deadfall opposite Eric Bana.

But Sons of Anarchy star Charlie Hunnam is set to arrive in a big way as cocky Jaeger pilot-with-a-past Raleigh Beckett in Pacific Rim. He teams up (in more ways than one, we’ve heard) with co-pilot Mako Mori (Rinko Kikuchi) as humanity’s last hope against the kaiju menace, and he talked Del Toro, directing styles and second chances when Moviehole sat down with him on the Toronto set.

We’ve heard your character’s a washed-up has been, can you elaborate?

Yes, he’s washed up from being the elite of the elite down to the level of regular man. He took a couple of chances when he was full of the bravado at the beginning of his career and doing very well. He’s flying with his brother, their desire to protect humanity overwhelms them and they disobey an order, which results in his brother dying. He gets kicked off the force for insubordination and you see this play out in the journey for Riley. It’s a process of slowly making up for that terrible mistake.

How did you end up with the role as Raleigh?

I’ve known Guillermo for a number of years – he looked at me for the role of the prince in Hellboy 2. I did a really terrible audition, which he looked past and did a prosthetic test with me anyway. I think somewhere between my bad audition and the prosthetics not looking quite the way he wanted he decided to go with someone else.

But I guess he always kept me in the back of his mind and we have a relationship with Ron [Perlman, who plays Hannibal Chau in Pacific Rim, is Hunnam’s Sons of Anarchy co-star] in common. So I kept getting little messages from him saying he’d been really enjoying my work on Sons of Anarchy.

Then he had planned to offer me a role in The Hobbit when he was doing that, and then that obviously didn’t end up panning out for him. So I guess in the early days he decided maybe this was the one for us to do together. He called me out of the blue and there was no script to read at that point which is the first time I’ve ever signed on to do a project without getting to read the script first. But if you’re going to take a blind shot, Guillermo’s as good a director as you can ever hope to do that with.

Do you often choose a project based on the director?

There’s a handful of directors who it’s looking more and more realistic I might have a shot at working with, and it’s really just about directors for me. A great script can be very easily made into an unwatchable movie in the wrong hands.

I used to be very motivated by material. If the script was fantastic I’d go for it even if I had some reservations about a director. But I’ve learnt my lesson with that – however good a script is, if the director’s made a few films that you didn’t think had reached their full potential then the movie you’re going to make with them is probably going to fall into that category too. So I’m just trying to work with the directors I admire and respect.

How would you describe the experience of Pacific Rim so far?

It’s been a very steep learning curve. The process of shooting these types of movies is something I’ve never experienced. Guillermo grew up making movies for absolutely no money, short films where he’d have an actor for 20 minutes then go and shoot something else and wait for that actor to become available again.

And that just developed as his style, he kind of jumps around a real lot. A director will traditionally shoot a master and then go in and shoot some medium coverage that’ll incorporate a couple of different actors and then go into individual coverage.

Guillermo will design a shot that incorporates the first 15 seconds of the scene and then just design another shot that compliments that. And then sometimes because of restrictions of money or time or lighting, he’ll choose a take right there on the day and completely lock himself into that because every shot will just cut directly into the next. And he doesn’t shoot anything that he doesn’t think he’s going to need.

So by the end of the day, before he’s even gone into the editing room, he’s completely edited the scene because there is only one option for the takes that he’s chosen because they’re so closely married to the next shot. That’s difficult for an actor that’s used to working in the traditional way of trying five different things.

Does that mean you just have to be on your game the whole time?

Yeah, but you also have to develop skills I’ve never really had to employ before, like be able to match one performance to the next take after take.

It’s been a fun challenge, and in some regards it actually makes it easier because you just surrender yourself to Guillermo and really don’t have to work as hard personally to bring as much to the table.