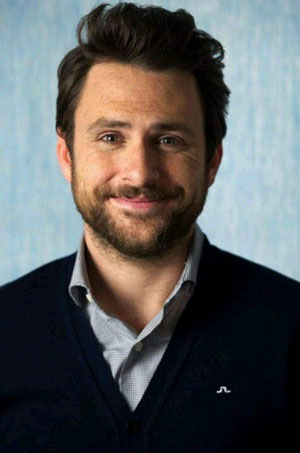 TV fans know him from It’s Always Sunny in Philadelphia, but to moviegoers, Charlie Day is the gawky friend of Jason Batemen and Jason Sudeikis in the 2011 hit Horrible Bosses.

From battling the advances of Jennifer Aniston as his sexually predatory boss to monsters the size of buildings as scientist Newton Geiszler, Pacific Rim is quite a departure for the 37-year-old, as Moviehole discovers when we sat down with him on the Toronto set.

A little different, you know, I’ve got more clothes on. I was talking to Rinko [Kikuchi, Pacific Rim’s female lead] and she was telling me how a kissing scene was a little awkward. So I said ‘try taking your clothes off and taking photographs with Jennifer Aniston on the first day of work.’ You know, that’s a little more awkward.

Did you audition for Guillermo for the part of Newton?

Did he do the cameo?

I’ve got to talk my partners into letting him do it but it should be all right.

How is he as a director?

He cares so much about the composition of the shot. He’s truly an artist. It seems to me like he’s painting a picture with every set up. There is a scene where my glasses fall off and I’m scrambling on the ground to try and get them, and he built this large pair of glasses to put in front of the camera, which is like an Alfred Hitchcock move. It’s great to work with someone who isn’t just stringing shots together but really has an overall art to it.

How do you create a memorable character in this huge monster movie?

Guillermo also makes it very easy for you to do that. He sent me a long list of everything that my character eats and thinks about and all the books he’s read and the details of my costume, which was incredibly helpful. He’s doing a lot of the work for you, which is wonderful, but he’s very actor friendly too. He wants you to bring as much of your own personal magic to it as you can.

You’re known as a comic actor. Does Newton Geiszler have an element of comic relief?

In the first draft he didn’t and I think they’ve tried to add a little bit of that, which is good because the movie has a lot of dudes with muscles, and every now and then you need someone who’s a little bit more like the everyman. He has his funny moments but he’s on a serious mission and there’s a moment or two in the film where you’re genuinely concerned for his well-being and you’re not just waiting to laugh.

Were you used to working with effects and green screens?

Today we’re working with the most green screen I’ve seen [Day and co-star Burn Gorman, as Hermann Gottlieb, have been crossing the huge, rainy Hong Kong landing platform set, a green screen surrounding the entire sound stage]. Again, Guillermo’s so detail orientated and I’ve been in such elaborate sets all throughout the movie, often I’m wondering where the green screen is. You know, you’re recreating the streets of Hong Kong and it looked like Hong King everywhere you look. I haven’t had too much green screen before today though, and now we have about 30 miles of it.