Skip to content
November 6, 2017 in Moviehole See more stories from this title 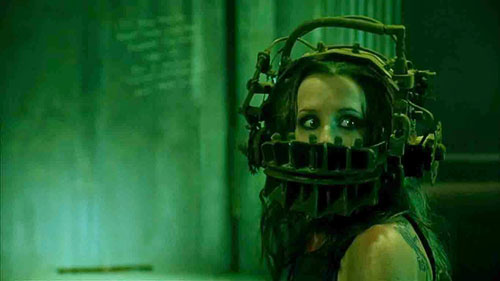 Danny Elfman, Mark Mothersbaugh and Atticus Ross are a new breed of movie craftsperson that used to be the domain of John Williams, James Horner and John Barry.

They’re rock stars turned movie soundtrack composers, and they’ve helped usher in a new era where musicians weren’t just inspired by movies and scripts but the iconic sounds they forged with their respective bands. Mothersbaugh specialises in the kind of pacey, pop-art esoterica Devo was known for and Ross was known for the alt-industrial, paranoid patois of The Nine Inch Nails.

There’s another former member of The Nine Inch Nails whose name you might not be as familiar with as Ross and bandmate Trent Reznor, but you know his work very well. Charlie Clouser has scored the Saw series – all seven movies, including this iconic signature theme.

After four directors and three writers, Clouser’s been a constant. Now, he’s returning to the world of pig masks, bloodthirsty traps and Billy the Puppet with Jigsaw, directed by Australia’s Michael and Peter Spieirig.

Hello Zepp became the signature tune across the franchise that signalled a lot of reveals, it became a very powerful piece of music. Was that the plan for it from the time you wrote it?

When I wrote the original version of Hello Zepp I knew that it should be memorable, simple, and hypnotic, since it needed to form the backing for a long montage of flashbacks that would have narration running in the foreground.

I tried to come up with a bold, compact little melodic phrase that sounded urgent and insistent, but still gave me room to expand and grow the theme as the piece went on. I wasn’t shooting for ‘iconic horror theme’ status or anything, I was just trying to solve a musical puzzle for that one particular point in that one particular film.

As we moved through the sequels and I had to extend and expand upon that piece of music, I realised how glad I was that the core of the piece was so simple, since I could add new sections and new melodic phrases without straying too far from the original piece.

Fans of the series can’t imagine a Saw film without that little ascending three note riff. What’s your relationship with it now?

I was once asked if I’d ever get sick of hearing that little three-note phrase, but far from it; that cue has become one of my favourite pieces to work on, and it’s always fun to try to find new ways to change it up without making it totally unrecognisable.

I like to keep some of the signature sounds in every version of the piece, sort of like an encoded signal to the die-hard fans, so even if I have added new drums and orchestral parts to a new extended version of Hello Zepp, it’s still recognisable as one of ‘Zepp’s children’.

After lots of head scratching and trying to figure out how to approach all of the rest of the score to a Saw movie, it’s almost a relief to get to the end of the film where my old friend Zepp is waiting. I hope the fans have a similar feeling!

The music was a pivotal part of the Saw series, almost to the point it might not feel like a Saw film without the themes like Hello Zepp. Was the brief or your vision of the project to throw everything out and start again, reference what had come before or find a happy medium between the two?

When I started on my score for Jigsaw, I thought that it should have a slightly different sonic landscape than the previous films, while referencing the themes and melodic material that’s relevant to this sequel’s story.

In many of the previous films, most of the story took place in traps, lairs, and dimly lit underground dungeons, so that required that the music have a certain murky feel.

In Jigsaw, much of the story takes place in the ‘normal’ outside world, so that affected how I approached the score. I used a lot of sounds that were brighter and more legible than in past films, and I was also able to add a new, less foreboding set of chord progressions and subtle melodies to accompany that new aspect of the storyline.

This new material was still closely related to the musical DNA of the core Saw themes, but feels a little more like ‘daylight’ than murky darkness, and even has a hint of optimism or hopefulness, qualities which are mostly absent from most of my previous Saw scores.

Even the trap scenes had a slightly different approach this time around; brighter, more urgent, and with more use of aggressive synth programming than the traditional Saw soundscape of clanking metals and weird orchestral effects.

It seems the music is about more than just the mood in the film, the market position of the movie (for want of a better term) is for it to stand apart from the original series and introduce new people and themes. Do you consider all that stuff when composing a score or is it just about what’s on the page or screen?

For this latest instalment in the Saw saga I knew that I shouldn’t just repeat what I’d done for previous films, but I still wanted to reference the most important melodic themes wherever appropriate. There’s a couple of spots where the score seems to flash back, and we hear a piece of music that’s been strongly linked to a certain location or aspect of the storyline in previous films.

Since the rest of the score is all new and sounds a bit different than before, in those moments when we hear familiar themes being played using the original sounds from a dozen years ago it really contrasts with the rest of the score. This only happens in two spots in Jigsaw, but I think it helps to link this new story to certain elements if the previous chapters.

You’re also working with new directors to the franchise. As a composer does your brief come completely from them or more from your experience with the past films?

The Spierig brothers had some great ideas about how to update the sound of the score without ignoring what has worked in the past, to the point that they actually did a couple of demo pieces of music, adapting some elements of my previous scores and rendering them with new sounds and new rhythms.

This was really helpful as it provided me with a concrete reference point that I could refer back to as I worked. When having a conversation about something as abstract as music it’s always easier to communicate when you can point to an audio example that everyone has heard.

The tricky part is striking a balance between the interesting new ideas that they had and the elements that I know will work in certain scenes. In the end, it wasn’t really too much of a head scratcher, and I’m glad that they were able to provide such a well defined reference for me to expand upon.

Did you start out with a strong belief that certain elements should carry over or that you wanted to start fresh?

There are definitely some elements of a Saw score that need to be there in order for it to have the right feel, but sometimes those elements aren’t musical phrases, just individual sounds. Over the years I’ve built up quite a collection of sounds that I’ve recorded specifically for these films, and which I don’t use outside this franchise, and in some cases I’ve had entire instruments built strictly for use in the Saw films.

With these elements in my toolbox I can create an entirely new piece of music that doesn’t share any of its musical DNA with previous films, and then bring it back into the sonic world of Saw by integrating a few of these ‘special sauce’ sounds. This lets me keep things sounding fresh without totally abandoning the established sonic footprint that has worked so well in the past.

When you’re the author of what’s come before in the music but the directors are the final creative arbiters of the project, how do you figure out what leads the process?

I feel pretty lucky to have been involved in all eight of the films, even as the franchise moved through different directors and writers. Like Kevin Greutert, who has been involved in every one of the films either as the editor or the director, we’ve dealt with so many twists and turns in the saga that we can bring that base of knowledge to the table.

On the flip side, we’re always looking to the directors for their take on how to get to the finish line, and ultimately they’re the ones whose coherency of vision must be respected.

After so many films, I’m eager for whatever suggestions and direction might help me put a new spin on the score. I’m quite happy to hand over the wheel, because even if I get some suggestions that are totally out of left field and make the score take a sudden swerve to one side, I think I can keep the car on the road.

You’ve done great in movie scores like Atticus Ross has. What has writing and performing with Nine Inch Nails taught you about writing music for movies?

One of my favourite aspects about being a part of Nine Inch Nails for so long was the fact that so many of the songs and side projects veered into scoring territory. Whether it was abstract instrumental remixes or music for video games, there was a lot of what I like to do contained under the umbrella of NIN during my years in the band.

The general attitude that we all shared with respect to musical sound design – aggressive programming and processing of sounds, composition and arrangement – is a natural fit for film. Between myself, Trent and Atticus and all the other NIN alumni there’s a pretty wide variety of film genres that we’ve applied our various styles to, but that central thread of dark, aggressive sounds, hypnotic rhythms and haunting melodies seems always to be present.

It seems like your collaborations with Marilyn Manson, Nine Inch Nails, Rob Zombie made you the perfect choice to score the kind of grimy, grungy horror films you’re known for, but is it more complicated than just being known for the aggressive industrial sound?

I think it might be my early experience making those aggressive sounding records that got people’s attention and opened some doors for me to jump back into scoring, but when I look back at all of the film music I’ve done in the sixteen or so years since I left NIN, that industrial/remix style makes up only a tiny percentage.

If I had pushed too hard to integrate that industrial style into my scoring work I think I’d run the risk of marginalising both the films and myself. Besides, after so many years hammering away at that style of music I was eager to stretch out a little, experiment and explore, challenge myself to do the kinds of music that I don’t already know how to do.

Not that I want to aim for mainstream or ‘ordinary’ type of films or anything like that, but I do love the fact that scoring gives me the chance to wade into lots of different waters, and swim in the ones that feel the most refreshing.