Skip to content
March 1, 2009 in The Sun Herald See more stories from this title 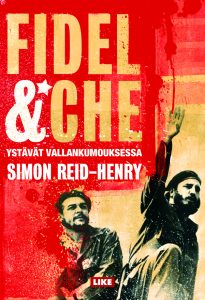 Just what is true about Cuba? Most western media and governments would have us believe Cuba is a small Caribbean North Korea, its people condemned to poverty, dissidents rounded up and shot by the bushel. Then there’s the alternative media and web-enabled far left, which characterise the country as a socialist Utopia with its limitless health care and a higher adult literacy rate than that of the US.

Queen Mary University of London Doctor of Geography Simon Reid Henry, author of Fidel & Che, knew the truth could only be found in one place — Cuba itself. His travels and studies have produced several authoritative works on a country that he confirms is somewhere between the two extremes.

“Life in Cuba is very difficult,” he says from his London home. “I’ve got friends there who put up with things on a daily basis we’d find intolerable. Of course there’s a functioning health system and education for all — positive freedoms that give you the opportunity to develop and cultivate yourself. But there are negative aspects that restrict you from exercising those rights. Most Cubans can’t travel simply because they can’t afford the visa.”

So it was in Cuba itself — a country that’s been subject to history’s longest trade embargo (led by the US and supported by Australia) — that Reid-Henry unearthed the true story behind the friendship that forged a revolution, from government records in hard-to-find collections, interviews with people casting their mind back 50 years and the collected works of both men.

Fidel & Che is a dual biography that charts Castro and Guevara’s political development, meeting, the defining moments of the 1959 revolution and their enduring influence over political idealism. It’s not the first time authors or filmmakers have tackled them – Guevara’s diaries have been pored over countless times, including in at least two recent films (2004’s The Motorcycle Diaries and this year’s Che).

The difference is that Fidel & Che isn’t just about each man but what they shared. If it wasn’t true it could be a political action/adventure novel, full of partisan manoeuvring, fearful suspense and bursts of violence about a plan that looked beyond hopeless at times. Following a career as a lawyer, several political as well as military attacks on the Batista regime and jail time, Castro had groomed himself to overthrow the government and eventually lead.

After Guevara fell into his circle of would-be revolutionaries in Mexico during Castro’s exile, they launched an audacious invasion plan. A small band of only several dozen bedraggled men boarded a ramshackle fishing boat, running into bad weather and arriving in Cuba so late the supporting fighters they’d lined up to help them had packed up and gone home. Starving and lost in unforgiving marshland, most were picked off by government troops, the band’s leaders escaping to nearby mountains to regroup and make new alliances.

Fidel & Che makes it seem like Reid-Henry was there not just for the auspicious speeches and decisive battles, but imparting details you’d assume were lost forever to history. In one passage, he describes Guevara’s mother, a feminist before her time in 1920s Buenos Aries who ‘smoked cigars and sat with her legs crossed like a man’.

An academic background obviously helps, but Extra suggests so much digging from such disparate sources qualifies the 30-year-old author as a private investigator. “I had to make a few leaps putting things together,” Reid-Henry agrees. “Often I drew on things like embassy reports, which tend to be very descriptive in substantial and often uninteresting detail, but you can take what you need out of them. I also tried to bring together as many sources as I could. If I was describing a room it was based on the testimony from what went on as well as any photographs of it from around the same time so I could really get a sense of what was going on. That work of reconstruction was important to what I was trying to do.”

But to paraphrase Socrates; after all the column inches, movies, comment and cool marketing imagery (at which Reid-Henry said Guevara would be ‘horrified with a small twinge of pride’), the one thing we know about both men is that we can never truly know them, Castro a virtual recluse and possibly dead since stepping down in early 2008, Guevara captured and executed by the Bolivian army in 1967.

While he manages to avoid Marxist paradise and Axis of Evil-style stereotypes, Reid-Henry must have felt he got a better sense of each man that most of us can achieve just by watching a documentary and having Alberto Korda’s famous Guevara photograph on our wall as university students.

“You certainly get a global sense of them as individuals, which even the most privileged friend perhaps doesn’t have,” he says. “Setting them alongside each other really helped because they were both such larger-than-life characters. Che was extremely introverted and that contrasted hugely to Castro, who had to take control of a room as soon as he was in it. Revolutions aren’t about one individual — Castro needed other people of a certain type around him to make it happen, and you almost need each man to put the other in context.”

But there’s another snag. Both men wrote copiously during their lives and careers, much of which quite naturally turns up in various reconstructions, fictional or otherwise. But Castro for one was a skilled propagandist and charismatic orator like totalitarian leaders such as Hitler and Mussolini before him. How can we believe what he or Guevara tell us in their many diaries, manifestos and letters?

“They both had a very particular view of history,” Reid-Henry says. “Che’s view was always that the rebels in the mountains won the war, but a lot of historians have begun to show the rebels relied on the urban underground movement that supplied them. You can’t believe or rely completely on what they say, which is another reason to go to Cuba and speak to people about what exactly happened.”

Cubans have never had it easy. After the fall of Soviet Russia the country lost its sole economic supporter and plunged into years of hardship. It’s a model society in many respects and a banana republic in others, but Castro and Guevara remain heroes to millions long after capitalism finally won the hearts and minds of the world, and their influence will be felt for generations to come. Whether they represent political ideals or iconoclastic advertising campaign fodder is like the question about Cuba itself; the truth is somewhere in between…