Skip to content
November 20, 2015 in Moviehole See more stories from this title 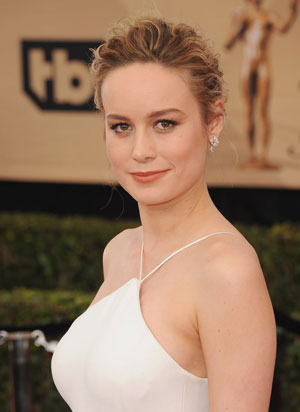 She charmed the inside world in 2012 with Short Term 12, but Brie Larson is no overnight success, having toiled in films – some of them big names (Greenberg, Scott Pilgrim vs The World, 21 Jump Street) since her first screening appearance in 1999 at just 10 years old.

Now the 26-year-old has hit the big time with alt-dramas like The Spectacular Now even though she’s still no stranger to more commercial fare. She’s playing tennis prodigy Billie Jean King in the upcoming Battle of the Sexes and recently signed on as the female lead in Kong: Skull Island.

But for the moment she’s got critics swooning thanks to her most buzzed-about film, Room, in which she plays a captive woman who makes her prison a haven of familial love with her five year old son Jack (Jacob Tremblay).

Larson spoke to Moviehole in Los Angeles about the deep process of becoming Ma that almost made her forget herself.

Had you read the book and how did it impact on your choice to sign on to Room?

I’d read the book maybe a year prior and Ma [Larson’s character] is one of the mysteries of the book because she’s seen through Jack’s eyes. She’s a saint, she’s so ethereal and like a faceless essence in the story, so I was really curious when I heard it was being made into a movie about who that face would be and never pictured it would be my face.

So the thing I was so drawn to by the book that was still captured by the screenplay was the myth that this wasn’t just a story about some sort of crime tale, it was Plato’s Cave, it was Rapunzel, it was Demeter and Persephone. It had all these reference points that I love so much that were woven into this story in such an innocent and delicate way.

I was lucky that when I sat down to meet with Lenny [Abrahamson, director] he understood it in the same way I did and was interested in exploring the same aspect of the story and not just taking something we’d seen in the news but taking it and reminding us of our roots and where he came from. It was a universal love story and a universal story about growing up and the pains that go with it and the beauty of moving in a small space as a child.

After we had our long discussion about mythology and shared pictures of our dogs and all those great things you do to start a working relationship he asked a small group of women to come in and read for Ma and it was such a lovely time for both of us to see if this was a proper working relationship and whether we could really capture what Ma was. A week later or something I got the call that I got the job.

How was the preparation and then the shooting of such a character?

It’s just this amazing mechanism that your brain does because it so wants to be helpful and keep all the information you need as accessible as possible.

For the course of the seven months I spent prepping my brain had everything that was her. I was really changing the neurological patterns in my brain so all this stuff was accessible so by the time we hit the set and we were shooting I didn’t have to think ‘oh, my wrist hurts’ and ‘oh there’s all this dark past that’s out there for me’ or ‘I’ve got lack of Vitamin D’ or ‘someone’s going to be at the door’. It becomes so ingrained you just know it, your brain works as if you are functioning as this other person.

It’s like when you hang out with your friend who has a dark depression and you come away thinking ‘now I feel depressed’. You have to find a way to shake it off so there were many things I did, like really being very open with friends and family and making sure I called them constantly to remind me what my name was, they sent me care packages, small things – I love this kind of wood you can burn and smells so nice, so I burned it in my apartment all the time and I’d say ‘oh, there I am, I’m here, this is me.’

Learning more about the brain helped me a lot because then it didn’t seem like I was going down some dark path, it was just my brain trying to be really helpful saying ‘oh, you want to be able to access the pain of sexual abuse? Here, we’ll put it right there in front’ and then later I’d go ‘Ok great, thank you, let’s move that somewhere else to another storage facility I don’t have the key to.’

How did the preparation change when you started working with Jacob, because the characterisation depends on the relationship with the character of Jack so much?

There are a couple of layers to her. There’s Joy, from being born to being 17 and then spending a lot of her time trying to figure out who she was.

Then there’s the two years of isolation before Jack comes along so I stayed at home and just sat with myself, I imagined there was a lot of time for her to reflect and magnify, to forgive and create a fantasy as to what the past was and in some ways glorify some aspects of her life.

Then there’s a low point where she cries and cries until she can’t stop before she becomes pregnant with Jack and she has thing new thing to live for and fight for that’s outside herself.

I had some amazing conversation with my mom and I’m at the age now where I have friends who are having children of their own and getting to speak with them there’s this turn that happens when there’s suddenly no time to wallow, your heart grows three sizes and suddenly there’s this thing that’s a piece of you that’s growing outside of you that you have to love and nurture and protect and at the same time try and explain what the world is.

So because of that I think she created this mythology for Jack that there’s nothing outside this room, not just for him but for her, so he could be the reimagining of this space and she could go down that path and see Room with fresh eyes, Room as their world.

From there it was just meeting Jacob and spending time with him and creating our own friendship.