Skip to content
September 25, 2015 in GQ See more stories from this title 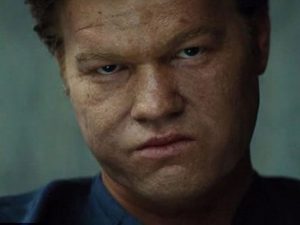 After breaking through in Breaking Bad, actor Jesse Plemons is turning heads as a bigger man for Black Mass.

Jesse Plemons is very hard man to pin down. His blonde, rugged features make him look every bit the heavy he plays in Black Mass – a henchman to Whitey Bulger, played by Johnny Depp – but the 27-year-old Texan native is quick to smile. When he does his whole aspect changes, making him look like a clean cut, all-American boy any good Midwestern girl would want to take home to meet her parents.

But even then his friendly demeanour seems to hide the spirit of a merciless killer. Amid all the great characters and scenes in Breaking Bad, audiences hardly blinked an eyelid at the stoic and hardworking Todd. When his crew started working with meth cookers Walter (Bryan Cranston) and Jesse (Aaron Paul) in Season 5 he seemed to fade into the background.

But when he coldly gunned down a little kid on a bike who’d witnessed a heist in the desert, we knew Todd – and Plemons himself – was a very unknown quantity. He talked to GQ about the role of Kevin Weeks at the Toronto International Film Festival.

Yours is the first face we see in the film. Did that make you feel any particular pressure?

It’s hard to pick out one particular moment where I felt pressure because it was an amazing opportunity and I really felt a decent amount of pressure from the beginning. Scott’s [Cooper, director] such a great director and a great person to have setting the tone for a movie. He was unbelievably confident and sure of the movie and all the players, so it slowly started to rub off and eventually you give in and trust him and hope that it works out.

You put on 40 pounds of muscle for the role?

Well, muscle and fat, yes. That wasn’t solid muscle, by any means, but yeah.