Skip to content
May 28, 2012 in The Retiree See more stories from this title 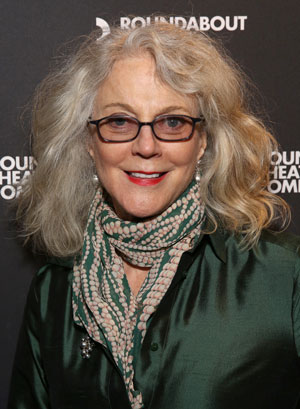 Actress Blythe Danner has been around long enough to have it all, careers on the stage and screen and two generations of family to dote on. And as Drew Turney discovers, it’s far from over for her yet.

Usually when you think of showbiz families you think of names like Bridges, Douglas and Sheen. Danner isn’t as recognisable, but few people mistake the name Paltrow, either director Bruce or actress Gwyneth – husband and daughter respectively to Blythe Danner, making her 45th appearance on screen with The Lucky One.

Her famous offspring has been a little quiet in Hollywood of late but 69-year-old Blythe has been stepping in front of the camera more and more, branching out into new genres and stretching dramatic wings that have served her on stage and screen for forty years.

Danner looks fabulous for her age when she sweeps into the room like a lithe, ex ballet dancer, on promotional duties for the film (directed by Aussie Scott Hicks of Shine fame). She plays the no-nonsense, seemingly all-knowing mother to Taylor Schilling’s leading lady, the young woman trying to do the best job she can as a single mother when handsome drifter Zac Efron turns up on her doorstep.

Danner admits with a chuckle during our chat that she’s had ‘a little help’ with her looks, brushing her cheeks and chin, but she exudes a natural grace with her large, kind eyes and silver/blonde hair that she sweeps back from her shoulders often, seeming both lush and delicate at the same time. Like the rest of her – a Tony-award winner who isn’t afraid to make herself look ridiculous for a role – the hair is a contradiction.

“She’s smart,” is how Danner describes her character of Ellie. “She doesn’t say much or prying and getting her two cents in about everything. But when it’s crucial she’ll speak up.” So how would she react if an ex soldier had walked across the country to woo her own daughter, as happens in the film? “I’d have to do a lot of lip biting, which I try to do anyway. As a mother and mother-in-law you try not to butt in too much. Luckily my kids have a lot of good sense so I don’t have to.”

The good sense she’s talking about has seen daughter Gwyneth, now 39, rise to the A list after roles like those in Se7en (1995), Shakespeare in Love (1999) and Iron Man (2008). But more importantly she’s enjoying family life with musician husband Chris Martin and their two children.

And even though she believes wisdom comes with age (something reflected in the role as well as her own life), Danner is sure the upbringing she provided her two children has given them what they need to survive. “I hate to admit that my kids are smarter than me, but they are. They saw the things I didn’t do perfectly and learned from that.

The Lucky One is a movie about fate. When a US marine finds a photograph of a woman in the desert following a battle, he leans down to pick it up and the action saves his life from a bomb that destroys the building he walked out of to see what was glinting in the sand. Believing the woman in the photograph saved his life, the hero believes himself fated to meet her.

And while the rest of the cast all seem to subscribe to beliefs about pre-ordained destiny, Danner stands apart, mostly because of losing her husband Bruce – a filmmaker who directed the pair’s daughter Gwyneth in 2000’s Duets – to cancer in 2002.

“If I believed in fate I’d believe there was a reason my husband was taken at age 58,” she says. “I used to believe in it. When people say things are meant to happen. Not that I was ever a great believer I fate. When somebody says ‘it’s supposed to be’ I used to think ‘I guess so’. It’s a good philosophy in general and makes things easier, but I don’t believe it any more.”

Danner says it’s an attitude she applies to her career in the choices she makes and trying to make the best of the roles she gets offered. Starting in the 2000s, it meant a new direction for her – comedy. After working in drama for directors like Woody Allen in 1992’s Husbands and Wives to Barbra Streisand in 1995’s sweeping, lush melodrama The Prince of Tides, 2000 showed moviegoers a very new side to her. She played Dina, the slightly sheltered, highly-strung wife to Robert De Niro’s buttoned down, scary family patriarch in Meet the Parents, a role that saw her – among other things – throw herself into a swimming pool.

“Acting’s become easier for me lately,” she says of her comic stylings. “The roles I’ve had recently have been a lot of fun to do because I don’t have to do a lot of strong drama anymore and bang my chest, which I’ve had to do in some cases.”

But whatever the project, Danner says she’s happiest in a group, perhaps revealing her theatrical origins. “I love being a company member, so I’m attracted by a good role in a company. I don’t want big starring roles because you make or break something. I don’t want that responsibility.”

It’s a strange refrain coming from a performer with such professional accolades. In 1970 Danner won a best supporting actress Tony Award in a production called Butterflies Are Free. Three more nominations followed – best actress in Betrayal (1980), A Streetcar Named Desire (1988) and Follies (2001). She’s also the first actress ever to be nominated for three TV Emmy awards in the same year (2005).

But these days she’s as much focused on family. Though her grandchildren spend a lot of time in London (their father’s birthplace) she sees them often and isn’t afraid to say she spoils them rotten. “We’re together a lot and it’s my role to spoil them. They’re really phenomenal, they’re great little travellers and smart and well behaved. My son-in-law is a stickler on manners, which is great, a very British thing. They’re great parents and have a wonderful way of raising them.”

When it comes to her grandchildrens’ controversial names (Apple, the subject of much media derision following the 2004 birth, and Moses, born 2006), Danner was supportive, telling the media at the time ‘we love unusual names in the family’ and ‘creative people choose creative names and unusual names. I think it’s a great name.’

But there’s a dark side to Hollywood, as generations of burned out starlets and performers taken away in their prime have proven. Did Danner feel the need to shield her daughter – in her early 20s as she rose to fame – from the excesses and dangers of being a Hollywood star-in-waiting? “Yes, but she did that herself,” the actress says. “I mean, you can only do so much. And I’ve never been in the limelight as much as my daughter and son-in-law have, so it’s something I don’t really have nearly as much experience with. They’re strong and handle themselves well.”

When she’s asked about the secret to long-term vitality, she talks about eating and sleeping healthy, but the her true secret almost unwittingly comes out. “I don’t think anybody can say they’ve learned it all. I’m sure if you ask Meryl Streep she’d say the same thing. As an actor you should always be digging and trying to find things.

Scott was so experienced and I love a director who’s strong, especially when you’re older. You develop habits that aren’t so good and it’s important to have someone to say ‘okay, don’t get quite so fancy there, just a little plainer and a little simpler’. That’s important and I love it.”

Danner also repeats an oft-told refrain about being too uptight in her youth for her liking, proving that Hollywood stars aren’t immune. “I wish I could’ve been more relaxed, more ‘loose’,” she says. “When I was a young mother I felt very guilty ever going away. I never handled that very well. Even working during the day I’d think ‘I should be home.’ Part of me thought I was probably a better mother when I was working too though because actors all have a little bit of insanity and it’s nice to get it out, not on your family but in your roles.”

Asked if she ever thinks about retirement, Danner replies with a laugh but absolutely no hesitation “No, I’d like to die on stage. I don’t want a long-term illness. I just want to drop dead on the boards.”