Skip to content
July 28, 2007 in The Sydney Morning Herald See more stories from this title 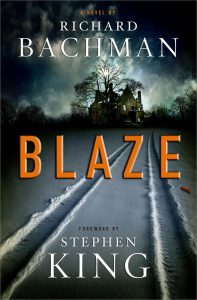 Considering he’s the world’s most prominent horror witer, it’s easy to forget how long it’s been since Stephen King has written an all-out horror novel. His last one was 1989’s The Dark Half.

King wrote Blaze more than 30 years ago. Unpublished until now, it is as he explains in the foreword, just one of several non-horror novels he wrote at the same time as writing the horror classics such as The Shining and Carrie that earned him his fame and reputation, knowing they wouldn’t make any money but writing them anyway.

He’d later christen the persona behind those early non-horror novels as Richard Bachman, the non de plume he used to write several best seller in the 70s and 80s, collected together in The Bachman Books and which outed the author as King almost immediately.

Since then, King’s appeared to have been more influenced by the Bachman persona, leaving monsters and ghosts behind to write about real life horrors like obsessed fans (Misery) and paedophilia (Gerald’s Game). So despite the name Stephen King on its cover, Blaze, being a Bachman book, is not a typical horror novel.

Set in America’s northeast in what appears to be the 1950s or 60s, Blaze turns on the story of a low rent scammer Clayton Blaze Blaisdell Jr, a giant in body — he stands more than 2.1 metres tall — but simple of mind. His partner George is recently deceased and Blaze is anchorless without him, though George’s disembodied voice inhabits Blaze’s mind, advising and admonishing him.

Blaze’s simplemindedness, we learn, is a result of mistreatment. Abused as a child by his father, he fared little better when subsequently sent to a brutal gothic home for wayward youth. His mental dullness is drawn as a consequence of the horrific treatment meted out to him, as what happened to an essentially good-natured soul who never knew love, whose close friends were snatched away from him just as they appear to be in his grasp.

Before George died he and Blaze were planning a final con — the kidnap and ransom of a prominent local businessman’s infant son. Readers will share with Blaze his lack of confidence as to whether he can pull it off. Yet somehow despite his size, Blaze manages to make off with baby Joe and go on the run.

The story is told in chapters that alternate between the past (Blaze’s formative years up to meeting George) and the present (the kidnap and subsequent pursuit as the police closer in).

Blaze’s childhood hard luck story sets the scene for a fairly predictable but still touching development, as he begins to experience with Joe the unconditional love denied to him by his past. “From now on it’s us, Joey,” he says after tending a minor injury the child has suffered, “You got me and I got you. It’ll be alright, okay?”

Blaze is as easy to read as it is high in quality and, although King has left the ghouls and shapeshifters far behind, it will remind his fans why they’ve loved his work for four decades.