Skip to content
June 1, 2007 in Desktop See more stories from this title 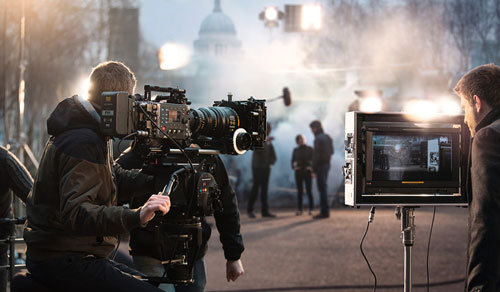 Anyone who’s ever seen a film set or TV studio in action knows they’re a picture of frenetic action and barely contained chaos.

Director Phillip Noyce turned his back on Hollywood when he was one of the industry’s most sought after thriller directors to return home to Australia to become ‘part of the solution instead of part of the problem’, leading to intriguing and highly political work like Rabbit Proof Fence and The Quiet American.

When asked whether he missed the broader technicalities of Hollywood (and Hollywood-sized) thrillers, Noyce shook his head. “No, you’re directing traffic most of the time,” he said, “With so many different people and crews it’s just an exercise in logistics.”

Actor Ian Bliss, while discussing his supporting role in The Matrix sequels, talked about how the gaps between calls as scenes were set up became so long he was able to walk to his flat not far from Sydney’s Fox Studios and hang around for a few hours before returning in time for his next cue.

Yet a frantic production shoot is ironically one of great control. Extremely elaborate tools are called into service to regulate the environment down to very narrow parameters. When the final product on screen can look natural, it’s in reality staged down to the last minute detail.

We all know a camera captures the action, but how much thought do you give to the other devices and the armies of operators who wrangle them?

To most, a tripod is a three-legged stand they can screw their camcorder to. And if you’ve ever watched footage from a consumer camcorder taken with a standard tripod, you won’t notice anything amiss on your TV screen or PC. But if you have High Definition image acquisition, those little jerking movements as the camcorder pans across a scene on a consumer tripod are made far more noticeable.

The tripod is more than just something to hold your camera up. Because the camera always point forward, the art and science of panning or tilting (moving side to side or up and down) happens in the tripod and the speed and smoothness with which it changes the direction of the camera.

The ideal mid range tripod mechanism (between the 35mm pro area and you average get-it-free camcorder model) is the fluid head, invented in the 1940s by Australian company Miller Camera Support.

It used to literally be a housing full of liquid where the camera mount and tripod body met, now it comprises a silicone grease. It ensures a smooth movement but more importantly a consistent one, the material in the housing exerting pressure or ‘damping’ the movement of the camera to ensure it accelerates, moves and stops without the jerky motion of lesser models.

The typical range for fluid head tripods is for between one and 5 settings and are controlled through a series of clutches. When you move into the big leagues of Hollywood productions (wherever they’re being shot) or large TV network studio shoots using 35mm film cameras, tripods are a bulkier proposition. Still offering the smoothness of a fluid head tripod, geared heads are the next step up.

Just what they sound like, geared heads move via the control of gears inside the head. They can be operated by an on-set technician or connected to elaborate computer based (often remote-controlled) and/or motion control drive systems that can be pre-programmed to follow carefully choreographed action.

It’s in post production that the screen comes to the fore in movie and TV production – in the era where so much of the content on screen is added digitally it has to be designed, constructed, previewed and synched to the rest of the film one step at a time, and the director, editor and VFX people need the best possible cinematic experience to work with in midsize theatrettes.

TV is still confined to the same small-screen world it’s always occupied but with one exception. Instead of the old way where a signal fired electrons at a glass surface to emit light to the viewer, LCD has taken over where the Cathode Ray Tube (CRT) has gradually gone the way of the gramophone. With the advent of the digital HD camera, TV can now enjoy a fully digital workflow.

Cinema has different challenges, and the fact that it must be bought back to 35mm film for projection is only the beginning. You’ve heard a lot about digital cinema lately, but digital projection is tricky to get right with a screen that has to be perforated (for primary sound like dialogue to come through). Any movement in the projector can result in picture artefacts which show up as unsightly stripes.

The perforations on a cinema screen are approximately 0.7mm and if you stand within 5 metres of the screen they’re visible to the naked eye. The two major providers are UK-based Harkness Hall and US-based Stewart. Harkness Hall produces the screen as pre-made sheets that need welding together and spraying with the vinyl finish. Stewart sprays the vinyl finish onto a single, screen-sized piece, resulting in a completely seamless but far pricier alternative.

If the director or effects crew are only previewing the image, the picture will be perfect as the screen doesn’t need to be perforated – they might be listening to the soundtrack from another source or not at all.

The trick comes when the sound must emanate from the screen approximately where the action’s happening, for example dialogue appearing to come straight from the actor’s mouth. Light can bounce back through the perforations to the viewer on certain angles and result in a loss of contrast, a factor that affects everything from the position and angle of the projector to the optimal audience area.

Of all the environmental factors that affect the final broadcast or film, the two that need the most regulation are sound and light.

Together with the ability of our brain to concentrate on given stimulus, our ears are remarkably efficient and sensitive machines. You might be sitting talking to a friend in a noisy cafe and easily ignore or tune out clanking cutlery, constant chatter or passing traffic. But the audience will not be in that small space between you and your friend. They’ll be sitting on the other side of cameras several feet away where recording devices not only can’t hear you but will pick up everything.

That’s the nature of EFP, or electronic field production, where you want total control over your sonic environment. The opposite is ENG or electronic news gathering, where you’re not staging a production but trying to collect everything you can for later editing and broadcast.

Mikes come in several form factors but there are two distinct types. The shotgun mike is one that rejects side noise and which you often see on the end of a long pole (boom). It can be swung back and forth between two actors according to the rhythm of their dialogue or held above an interviewer and their subject. ENG set-ups may also contain a windjammer, the fuzzy cover you see on external mikes to cut down the rumbling of the wind passing directly over the mike’s input.

Omni or unidirectional mikes are designed to let sound in from other directions but concentrate it from the front according to several grades. They’re also called cardioid mikes and are usually used for controlled or indoor recording such as the small mikes that pin to the clothes of interviewees.

Once the sound has all been captured on set, in the studio or in the field or anywhere else, it’s time to take it back to the sound studio and adjust it prior to cutting. Individual recordings are processed as tracks and they can be collected from plenty of off-screen sources. Take a generic scene of a car screeching to a halt and police jumping out to fire on a fleeing criminal. The screeching tyres, gunshots, opening and closing doors and even footsteps will likely all be separate tracks, not even recorded on set or at the same time.

The old-style mixing desks with the huge grids of dials are still the interface in a pro operation. They simply give you access to every track in your project or scene all at once. As in every field of production, digital has bought about a huge middle ground for low- or no-budget filmmakers, and the huge boards of a mixing desk can now be found virtually in software such as Pro Tools or Apple Soundtrack Pro.

The backend of sound mixing has changed and even though you still see manual mixing desks for bigger productions, hardly any sound is edited in analogue format nowadays, and whether it’s your PC or a mixing desk, you’ll be accessing a digital library of sounds.

Light is even more important and difficult to keep under control than sound. While the microphone is a crude approximation of an ear, no camera on earth comes close to the minute intricacies with which the human eye can distinguish light sources, strengths and colours. If you’ve ever carried a camcorder outdoors on a sunny day, you’ll see the picture explode in white light before realising it has to adjust to let less light in – a process your eye does a million times a day with far more subtlety.

The camera also picks up reflections and shades our eyes tune out. Fluorescent lighting as you’d find in an office, for example, has a very strong green spike on camera that isn’t visible to the naked eye. The challenge for the lighting team – from the director of photography down to the gaffers – is to light a scene for details the human eyes on set may not even detect.

Lighting comes in two basic types. HMI (hydrargyrum medium-arc iodide if you’re that curious) and Tungsten. HMI can broadly be termed a ‘daylight’ light and Tungsten a ‘night time’ light because of respective blue and orange hues.

Studio lighting is as you can imagine far easier. Firstly you avoid the obvious downside of filming outside and capturing a far wider background, the lighting of which you can’t control. Then there’s the terrible job sunlight does of lighting people for film. It’s the equivalent of a single powerful overhead HMI that lights up hair, shoulders and the tips of noses while leaving the hollows of the face (like the eyes) black holes of shadow.

The answer is to either light from underneath or in front to the appropriate strength, or diffuse the light above with what’s called a scrim or overhead – often a combination of the two.

A professional scrim is a piece of silk fabric, that comes in a range of thicknesses to spread the light around the subject and let enough through to the satisfy the DOP, director and camera. It comes in pieces up to about 20 square metres – if the cameras are any further back that that you’re not going see any details of faces anyway. A comparable low budget equivalent is the handheld reflector sheet that any light source from a lamp to the sun directs onto the action. The only danger is unless you have an uncannily still production assistant your actors will look like they’re talking beside a pool, sunlight dancing and glinting on them.

The bigger the production, the bigger the departments looking after all this equipment become. Each with their own leader, the light, sound, camera and countless other teams combine to form a production crew much like marketing, sales, accounting and the cafeteria combine to form a corporation. If you ever find yourself in charge of one, you’ll realise how much preparation goes into making the action on the screen look like the most natural thing in the world…