Skip to content
February 7, 2016 in Moviehole See more stories from this title 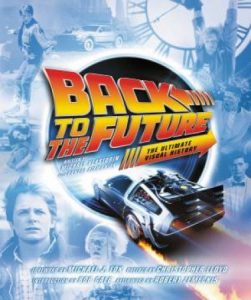 Back when Moviehole.net interviewed Crispin Glover in early 2012 about his current projects and his role as George McFly in Back to the Future, he gave us the scoop on the behind-the-scenes scrap that led to him not reprising his role for the sequels (and causing a script rewrite that dramatically reduced any appearance by George in the continuing story).

Aside from the visual and contextual treat for longtime fans of the series, Back to the Future – The Ultimate Visual History gives us an insight into the conflagration from the other side.

Written by a superfan (Atamaniuk) and the publicist who worked on the second and third films (Klastorin), it describes on-set behaviour by Glover that ranged from merely belligerent to outright obstructive on a shoot that was constantly battling the clock (Michael J Fox, committed at the time to Family Ties, was only available each night until dawn, grabbing snatches of sleep in the cars that shuttled him between sets).

Back to the Future – The Ultimate Visual History is the printed version of the exhaustive Oral Histories of your favourite movie that have become increasingly popular in the web age, and it comes from similarly authoritative sources.

With so much film history lost in time (and 1985 can legitimately be called ‘history’ in Hollywood), we can all be grateful the studios at some point realised what a goldmine they were sitting on.

In a world where the post-theatrical market of a movie (DVD special features, theme park rides, comics) presents a real profit opportunity, it makes the archiving, maintenance and exhibition of behind-the-scenes drawings, props and even executive memos a science in itself.

But there’s something even more special about seeing and reading all that stuff from a film that’s now genuinely old enough today’s target movie market weren’t even around at the time.

Movie studios have always had the foresight to install publicists on sets to wrangle the threads that document the making of a movie when the primary crew is more concerned with just getting the thing made, but the amount of detail that’s come out of interviews with the creatives, actors and even studio people is more than you thought there was to know, even if you’re a hardcore BTTF fan.

It also makes Back to the Future – The Ultimate Visual History a perfect companion piece to the recent documentary Back In Time, delving more into the production of the movie itself as well as covering various spinoffs of the BTTF name, like chronicling the Eric Stoltz saga in full.

Most of the early scenes with Stoltz playing Marty were in the can (you can see clips online), but director Bob Zemeckis and writer/producer Bob Gale knew he wasn’t right for the role. Even with the time pressure the production faced, they somehow convinced the studio to sacrifice six weeks of work and start again when their first choice – Michael J Fox – became available.

As befits the recent craze for heavy coffee table books offering the inside story of your favourite movies, it also contains loads of great fun inserts and removable items like the hardcover dust jacket of George’s novel A Match Made In Space, a security pass to the Back To The Future Ride that ran at Universal Studios Orlando from 1991 to 2007, a Biff Tannen one dollar bill from the alternate 1985 and the ‘Save the Clock Tower’ flyer, complete with the phone number at Jennifer’s grandma’s house and ‘I love you’ written on the back.

Gale and Zemeckis have final veto on whether a sequel will ever happen (they’ve both repeatedly said it won’t), so with BTTF fever having just died down again thanks to October 21, 2015’s Future Day, Back to the Future – The Ultimate Visual History might well be the last word on this movie classic.