Skip to content
August 4, 2012 in Penthouse See more stories from this title 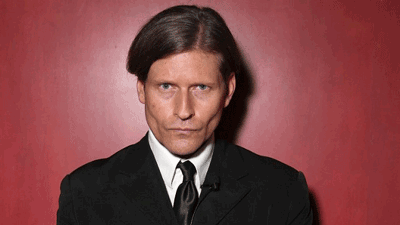 ‘I know my persona is that of a crazy guy,’ says one of today’s most enduring and distinctive talents. Drew Turney gets to the bottom of the deep well that is Crispin Glover.

Tell us about your one-man show.

There are two different films, What Is It? And It Is Fine, Everything Is Fine. They’re two parts of what will be a trilogy and before each I perform a live show which is me narrating eight of my heavily illustrated books.

They’re really my reaction to the constraints of the last 30 years in corporately funded and distributed filmmaking, where anything that can possibly make an audience uncomfortable and genuinely ask questions is excised.

I’m very passionate about both of the films and it’s been a great experience to go out and meet with people about them.

It sounds like something of a position of activism for you.

In a certain way it is. I’ve been noticing the Occupy movement and it’s related to the corporate constraints that have happened in filmmaking, which is turning films into propaganda.

You’ve come a long way since Back to The Future.

Yes, I think people thought I was older [Glover depicted the 47-year-old George McFly] but I was 20 at the time.

Are you sick of talking about the Back to the Future films?

No I don’t mind talking about anything, ever.

Did it throw you off balance when Eric Stoltz (the original Marty McFly) was fired?

I’d been in an acting school with Eric and we’d played brothers in a production when I was 16, so I’d worked with him before. And most of my role was already shot with him. It’s disturbing to have the main actor fired after six weeks of shooting.

But the role was clear. It wasn’t like there were great variations in how I played it but what’s just as disturbing was that I felt good about the work [shot with Stoltz] and then I had to replicate it, and that’s hard to do.

Did you forge a relationship with Michael J Fox?

No. He was working on Family Ties at the same time so there wasn’t a lot of time to sit around and chat. On the last day of shooting we were talking a little about whether the film would do well. I asked if the film did well would he still work on TV and he said there was always a place for television.

And you didn’t return for the sequels.

It’s complicated. There was no agreement reached for the financial issues and there was a lawsuit. They put another actor into a false nose, chin and teeth based on casts they’d taken of me and they used footage from the original film.

Bob Gale (franchise producer and co-writer) was instrumental. Steven Spielberg was a part of it too, although as executive producer he wasn’t as actively involved. [Gale’s] been making things up on the DVDs and in interviews where he says I asked for the same amount of money that Michael J Fox asked for. It’s total falsification.

What was the real reason they didn’t want you back?

I had questions about the original screenplay that they didn’t like me asking. They claim that it was just that I was being stubborn about money. It was the opposite.

Does it hurt to go back over it?

I don’t love talking about it. It sounds so bitter and nasty but [Gale’s] still doing it, and I won’t respond because I know anything I say will be used as their propaganda.

It’s unfortunate because they’re very well liked films. I’m proud of my work in the original and had I been in the other two I think it would be a very happy experience. But the way it happened gives me a very tainted sensibility about corruption or propaganda in the film world because it was one of my first major experiences of it.

Were you scared you’d never work in Hollywood again?

I had to defend myself with my lawsuit, and I’m proud of it because it set up certain rules and laws and principles. I knew the lawsuit would have negative consequences, but while they own the character of George McFly they don’t own me and they don’t own my face, so that was theft.

You disappeared from film for awhile, did the experience make you more particular?

There were things I was being offered that I frankly didn’t like. Over the last decade I needed to fund myself to complete my films and tour with them so I’ve worked a lot. This year I did a film based on an Elmore Leonard novel called Freaky Deaky.

But I was pretty particular up until about the year 2000. I was trying to find films that reflected my interests, then Charlie’s Angels came out and it did very well. I realised I needed to make a different decision on how I was running my acting career, I needed to make as much money as I could to be able to make my own films.