Skip to content
August 1, 2008 in Empire See more stories from this title 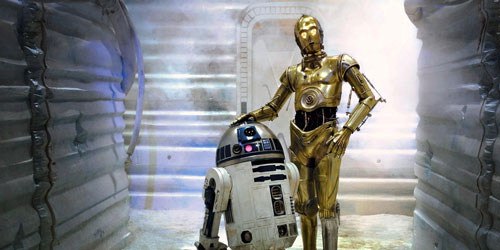 It’s human nature — since time immemorial we’ve attributed human characteristics to everything around us. From the Freudian (so we don’t feel so alone in the universe) to the commercial (Pixar’s box office hauls), the reasons why pop culture is full of human-like intelligence are endless.

And nowhere are they more manifest than movies about machines. From Metropolis (1927) to Wall.E (2008), a list of the best intelligent machines in movies could number in the hundreds, and this small cross section barely scratches the surface of the most enduring themes…

The baby-boomers’ 1950s leisure utopia dreams in the flesh. Er… steel. This bobble-headed drone provides home security, the heavy lifting required for spacecraft maintenance, women’s fashions on demand (encrusted with diamonds, no less), turning raw materials into gallons of whiskey and the odd double entendre; ‘Sorry Miss, I was giving myself an oil job’.

Nearly every post-Vietnam era robot movie deals with the Prometheus myth — that our creations will rise up against us. The most literal interpretation of it is Richard Stanley’s post-apocalyptic fable of technology gone mad, where a commando in a ruined desert world brings his sculptor girlfriend the deactivated head of a killer robot, thinking she’ll find a creative use for it. Instead, Mark 13 reassembles itself from her junk pile and goes on the indiscriminate killing spree it was (mis)programmed for.

The base model of the series of increasingly dangerous cyborg warriors dispatched by SkyNet to stop the war against humanity before it begins. It’s not only an unstoppable killing machine, it learns and remembers everything from semi trailer gear transmission to utterances like ‘Hasta la vista, baby’. But why would anyone model it on a former Austrian body builder and future Governor, and what’s with that silly accent?

There isn’t nearly as much discussion about whether the talking freeway sign is real or a figment of Harris Telemacher’s (Steve Martin) conscience as there is about whether Rick Deckard is a replicant, but Martin and director Mick Jackson’s love letter to the City of Angels is beautiful and lyrical in its own kooky way. When weatherman Telemacher can’t make head or tail of his uninvolving job or shrewish girlfriend (Marilu Henner), an electronic freeway sign takes a shine to him (get it?) — advising on his love life, foretelling the future and asking for a hug.

Decades before a jittery US Administration warned us about cyber-terrorists, the enigmatic program Joshua proved the wisdom that the network is the computer. He’s all software, designed to push The Button without the guilt or compassion of a human, but when hacker David (Matthew Broderick) challenges him to a game of Global Thermonuclear War, Joshua’s fatal flaw is revealed, considering a nuclear holocaust no more than a game of noughts and crosses. ‘A strange game,’ he surmises to a collective sigh of relief, ‘the only winning move is not to play’.

Yes, they’re the most famous movie robots and most movie lists would give them equal billing at the top, but they actually walk in the tradition of a long line of automated helpers from the sci-fi genre. What makes them so distinctive is the presence of personalities you could never program in. Was Threepio’s constant whining little more than a feedback loop programming bug constantly building on itself to become his signature quirk? Who’d design a robot to quote the odds of surviving a battle with an Imperial star destroyer at the most infuriating moment? As the Laurel and Hardy of deep space, the duo’s excess of humanity puts Aibo to shame.

Totally ripping off HAL-9000 from Kubrick’s space travel masterwork, Rock is the AI system responsible for maintaining the Mayflower 1, mankind’s first commercial spaceflight to the moon. A quick control room fire scrambles Rock’s circuits and he puts the Mayflower 1 on a collision course with the sun (‘The sun? What is it?’), killing anyone who tries to regain control. He fools them all with his benign computer voice before navigator Elaine (Julie Hagerty) backchats him once too often. “Look Elaine,” he drawls, “cut the ‘not from where I’m sitting’ shit. There is no malfunction.”

It must have been Yul Brynner’s easiest role ever; hook his thumbs into his pants, plant a stoic look on his face and stride around the futuristic playground in Michael Crichton’s groundbreaking sci-fi thriller. The movie version never explains what sort of bug infects the Delos resort, but the robots that inhabit it slowly go haywire when a droid rattlesnake bites one guest, Romanworld concubine Daphne (a sex model) rebuffs the advances of another with a slap, and Yul predates The Terminator by a decade in his unstoppable quest to kill heroes Richard Benjamin and James Brolin.

It’s not even in Spielberg’s top ten, let alone his best movie. But it went one step beyond the mechanical helper model of robotics to seriously investigate the idea of robots replacing humans. After losing her son, grieving mother Monica (Frances O’Connor) need only read a series of keywords to close the circuits in android boy David’s (Hayley Joel Osment) brain and he’ll love her forever, an anti-Terminator who won’t stop until cuddled. The rest of the movie is a mess of 1941 proportions, and we can only dream of what Kubrick might have made of it.

A machine rebellion threatening humanity was all Hollywood, not Asimov. The author was actually fascinated with his own three laws of robotics — how they could be misconstrued, abused, and skirted around. But a new model NS-5 being the prime suspect in a murder was his idea, and under his genius it raised a universe of questions about a machine having sentient consciousness, not just the string of commands we impose on it.