Skip to content
February 3, 2013 in TimeOut See more stories from this title 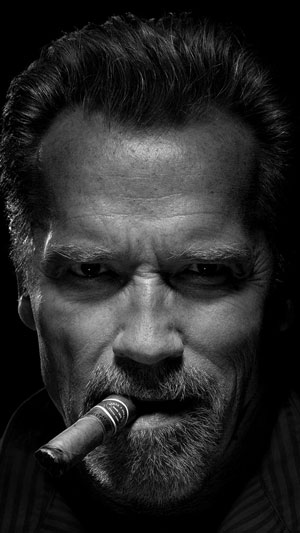 Back from his political hiatus, Arnold Schwarzenegger returns to what he does best – kicking arse and taking names, as Drew Turney learns.

“They put you in a room with the biggest weapons and say ‘this one has the most firepower, this one can kill the most people’. You just pick a bunch of guns and start shooting.”

Thankfully Arnold Schwarzenegger is talking about a movie and not an initiative of his California governorship. In fact it’s not until he explains the way he got back into movies that you realise how far apart the two are. In politics you have to pretend to be everybody’s friend. In his role as the sheriff of a small desert town in The Last Stand, he’s pointing a middy gun out the back of a bus blowing away the minions of an escaping felon.

Of course, when you’re talking about Schwarzenegger action movies, one thing’s completely different this time around – Arnie himself, no spring chicken any more. As if pre-empting the inevitable gags, there’s a scene in the trailer where he gets thrown through a window and bystanders ask how he feels. ‘Old’, quips the 65-year-old.

“All of a sudden you see this body not looking like it used to and not having that strength or endurance any more,” Schwarzenegger says, meeting TimeOut in Atlanta where he’s shooting his next movie, action thriller Ten. “I’ll say ‘Jesus I’m really sore today, that didn’t happen before’. But the great thing about being in physical shape and exercising every day is that you have the advantage that you can jump in and do the stunts again. I feel good about where I am at this age because I’m in much better shape than the majority of men my age, but I feel shitty that it’s not the way it used to be.”

And how. Despite showing it a little around his iron-coloured eyes, Schwarzenegger is certainly in shape – evidently the work that went into all those Mr Universe and Mr Olympia titles has paid off. He must have been itching to get back in front of the camera to shoot, run, jump, shout and blow things up.

“In fact quite the opposite,” he says. “I visited a set with Tom Cruise hanging upside down on a harness fighting some alien or something. A friend asked me if I missed it I realised I didn’t. I’ve hung upside down in harnesses too many times.”

So why come back at all? The way Schwarzenegger tells it, he stepped from one world into the next almost without realising. “When I finished [politics] I started getting offers again and thinking it was great. It wasn’t long before I was saying ‘Jesus, how did I spend every day in [California state capital] Sacramento with these boring people?’ Whatever world you’re in, that’s what you know.”

We’re sure action fans everywhere are happy to welcome Arnold back to the world he knows so well.