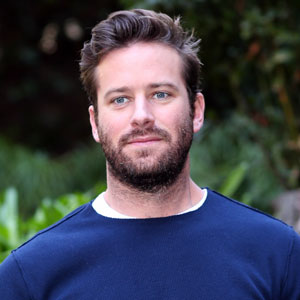 Rarely has there been such a rise to stardom than the one that carried Armie Hammer to world attention. It wasn’t just a director of David Fincher’s calibre that saw him to play identical twins Tyler and Cameron Winklevoss in 2010’s brilliant The Social Network, it was the same seamless effects we saw in The Curious Case of Benjamin Button.

It was quite a start to Hammer’s A-list career, so after another solid dramatic support role as Clyde Tolson in Clint Eastwood’s J Edgar opposite Leonardo Dicaprio, why not make his next move a comedy?

As the primped monarch just asking for an embarrassing comeuppance in Mirror Mirror, Hammer got to tap into his humourous side, and the actor talked comedy, drama and The Lone Ranger over the phone from the floor of a hotel room in Los Angeles recently.

Were you particularly looking for a comedy after J Edgar?

Any of the offers that have come along have just been the right place at the right time. They always say a Hollywood career is where preparation meets opportunity and it was a little bit of that. I loved the idea of working with Julia, that was really exciting.

You had great comic chemistry on screen, was it a bit nerve wracking working with her?

I was a little nervous but then when we started I realised what a pearl she was. She’s really good so it encouraged me to say ‘okay, let’s make this whole thing really good’. As soon as the camera rolled Julia Roberts disappeared and we just started getting a team together. It was fun.

Does comedy come naturally to you?

I actually studied comic acting for awhile so I knew about the moments, the build up and the payoff and the contrast of movement to stillness. It’s actually a bit more nerve wracking than doing drama. You can be angry or sad a multitude of ways in drama but for something to be funny it’s got to be right or it’ll just fall flat.

Was it the comedy or the fantasy elements of Mirror Mirror that attracted you?

The thing that first grabbed me was that Tarsem was directing it. Then everything else was an added bonus, getting to work with Julia Robert and Lily Collins.

Because Tarsem is such a visual director did you ever feel a bit lost in the elaborate backgrounds and effects?

No because he has this definite vision for his actors. You just felt like everything that was happening was happening how it was supposed to and it was all part of the experience. Those sets were humoungous and it was all built to such a scale it was almost like you were there in person.

Does that make it easier as an actor because you’re surrounded by reality instead of green screens?

It definitely takes less work when you can focus on the place itself, that’s for sure.

Were you concerned when you heard there was another Snow White film in the works?

I didn’t think much about it because everyone kept saying we were coming out first. But the more I found out about it the more I realised they were completely different movies. They could almost come out on the same weekend and it’d be fine. Ours is a family movie, it’s a movie you can take your kids to. Theirs is a completely different audience, more like the Twilight crowd.

Do you think the trend for fairytale movies might end up done to death like so many movie fads?

Maybe. They don’t make many asteroid movies nowadays but they certainly had a good run. So at least we got in when we did – the whole fairy tale thing might get tiring in awhile.

Can you talk about the experience with The Lone Ranger being on, then off, then on again?

Fortunately I’d got the job a few days before it all fell through, so it wasn’t like I’d invested that much time focusing and concentrating on it. But I always thought it was a heavy-handed negotiation technique. I never really thought they were trying to shut the movie down, I just thought they were playing some serious hard ball.

But they got the budget down and now we’re looking good. We’re filming right now.

After a very short time at the top you’ve already branched out across genres. Anything you’d still really like to do?

I don’t know. I haven’t really planned out anything I’ve have done I didn’t sit down with a note book and ask myself what directors I really wanted to work with. You just go with it and let everything happen as it does. If another great opportunity comes up with another great director I’ll put every bit effort and energy I can towards it and hope that it works out.