Skip to content
February 28, 2015 in Moviehole See more stories from this title 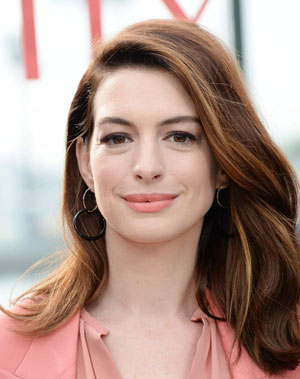 Is music particularly important to you in your own life?

It is a big part of my life, yeah.

Is that why you signed on to this film (Song One)?

It’s part of the reason why it resonated with me. It’s really difficult to define and even saying it out loud sounds really cheesy but I believe in the healing power of music.

It’s a really hard thing to say but I thought the screenplay did a great job of capturing that feeling. So I think maybe my relationship with music is why that resonated with me and then as the project got more and more real and when [the film’s composers Jenny Lewis and Jonathan Rice] came on to do the music and the music became so incredible, I got even more excited to be a part of it.

Ever have your own singing/songwriting fantasies growing up?

No, my fantasies were very much about being in the centre of a Broadway stage, my arms raised like Eva Perone. So no, I appreciated singer/songwriters but it never occurred to me that I could be one. Song writing is not one of my skills.

What music do you find soothing like your character of Fran does?

Soothing is an interesting word. Do you mind if I offer up a different one? Cathartic.

Even before Jenny and Johnny and I were friends I was such an uber fan, and it took me until two years into our friendship to tell her a story about this terrible day I had on the set of Love and Other Drugs where I had to do a really emotional scene – the climax actually – and I couldn’t get to the place I needed to get to.

I was really getting down on myself and [director] Ed Zwick had sent me home and told me not to worry about it, that he’d budgeted extra time and they’d be able to finish the day. He said ‘please don’t put pressure on yourself’, but that wasn’t going to happen.

So I went home feeling down, and I was heading into work the next day and asked my iPod to send me some really great music that I hadn’t heard yet. I just pressed shuffle and song number four was Jenny singing a Rilo Kiley song called ‘The Better/Son Daughter’. I’d heard it before but I never really heard it, and it just spoke to my soul in a moment of real need and pushed me out the car and got me onto set and I’m really proud of my work in that scene.

Fran has to look at her brother lying in a coma in a hospital bed. You have two brothers and I can’t imagine you’d want to think about one of them lying in hospital but do you have to do that for the sake of your art?

You base it on that very primal feeling of love. And yes, you go back over the catalogue of your memories, and in this case with Franny ‘when did I mess up, make a mistake and feel guilt?’

But other than that, truthfully, if it was my own family I don’t know that I’d be able to function. So you have to be able to have separation and remove yourself from the character.

But my little brother, when I told him about the movie he was like ‘what is it with you and little brothers in distress?’ I was like ‘I don’t know buddy, I’m sorry’. Because with Rachael Getting Married I called him and I was like ‘Hey, so I’m in this movie, my little brother died and I kind of killed him’. There’s a part where she’s looking back over photos so I asked him if I could use photos of him. He let me do it and that was actually really helpful.

How did you manage to get so many great musicians into the movie?

My husband and I were friends with Jenny and Jonathan. When we initially read this new play back in 2011 we just had one of those moments where we said ‘okay, dream musician for this; Go.’ And we both said them.

We kind of laughed at our audacity and decided it could never possibly happen because they were friends and we would’ve felt awkward and worried about it bordering on being opportunistic.

So we spent a while pursuing other avenues, trying to come up with better ideas before Kate [Barker-Froyland, director] came up with a draft that focused on the James character and we asked Johnny to read it.

He asked who was doing the music and half joking we said ‘well, you, if you want to’. Jenny read and liked it and they were open to meeting Kate. They met and really liked it each other.

Next morning we opened up our emails and there’s a song called Little Yellow Dress and it was incredible. Then our producer Jonathan [Demme] has one of the deepest and most beautiful encyclopaedias of music in his head. To watch him and Jenny and Johnny talk music and talk about the sound and who James Forrester [the male lead] was, it was a thing of beauty.

From then on they were in the movie and a lot of the musicians in it are contacts they have. They were so enthralled with the sound of the film.

So do you like to think Fran went and found James after the movie ended?

We all have a different opinion about that. Just because I don’t want to influence anyone’s viewing of the film, I’ll hold off on that one.

The love story of the film depicts the characters as being quiet and just kind of falling into each other. Is that your own experience of romance?

I’ve had a few different types of relationships in my life. I’m just thinking back to an experience that I had where the stakes weren’t as high thankfully, nobody’s life was hanging in the balance. But I was going through a rough time and this stranger just came into my life and we spent a lot of time together for a short amount of time.

I don’t see him anymore and we don’t talk anymore but he had such a positive impact on my life and really opened me up in a lot of ways. I think that’s part of the reason where the story resonated with me. What appealed to me was universal so I know if it resonated with me like that it could possibly resonate with other people.

And it is a quiet love story. You know sometimes when you get to know someone and you have time on your side there’s a honeymoon period, there’s deception and you have to get real with the person and let them see all your flaws and all that.

These are not characters that are operating under that set of circumstances. The stakes are so raised that they have no choice but to be completely honest and sometimes that honesty comes in the form of silence. And, you know, I think this is a movie about that moment in your life when only a stranger will do.

Is it also catharsis to do a small indie movie after something so huge like Interstellar or Les Miserables?

I never notice the size of a movie. I just focus on the resonance of the story and that will come in all packages and all sizes, you know. There’s more variety to the catering on bigger movies. We sometimes even get our own trailer on a big movie, on this we were all in honey wagons and it was nice because they were so small, so we’d all get kind of changed in the morning and then once everyone was in their costume we would open the doors and have like a communal space. We would always find ourselves back there just playing music.

Your character keeps trying to use pancakes to liven the senses. Is there like a food the smell of which would wake you up from a deep sleep?

There are very few things I wouldn’t do for choc chip cookie dough ice cream. I can’t say the smell wakes me up but that became a deep, dark favourite when I stopped being a vegan.

I was a vegan for two years and I am no longer a vegan.

Because of the ice cream?

Not because of the ice cream but you know, that’s one of the things keeping me not going back.

But nothing that would rouse you from a coma?

I can’t think of anything right now where it’s like I must, must, must have it. It’s really nice whenever I find myself at home and my mom cooks something from my childhood. Now that I don’t live at home that’s rare and wonderful.

How attracted were you to your character’s profession as an anthropologist?

Kate gave me all the books she thought Franny would read and I could not get through them. The density of the books just kept getting lighter and lighter until finally I was reading like a graphic novel about archaeologists.

There is such a thing?

It literally was. It was like a graphic exploration of famous archaeologists and even that was a little bit too hard. I really had a lot of fun discovering the science of Interstellar. All the particulars of anthropology I could not. Did I say archaeology? Because I’ve been talking all day, or did I say anthropology?

Sorry, sorry, anthropology. Clearly I don’t even know what I’m playing. No, please insert anthropology whenever I said archaeology. So I just don’t have a brain for that but I do think it would be fascinating to be able to go out and discover different cultures but also lonely.

Considering it’s a movie about music do you have a favourite song?

I couldn’t have an absolute favourite but my karaoke song, which I think is probably like a happy compromise, is 99 Luftballoons.

I can do both actually. Oh yes, I’m a very accomplished person.

You’ve got to promise us you’ll do that in an upcoming role.

I promise nothing. But next time you interview Christopher Nolan tell him that’s his next musical motif.