Skip to content
September 28, 2006 in Xpress See more stories from this title 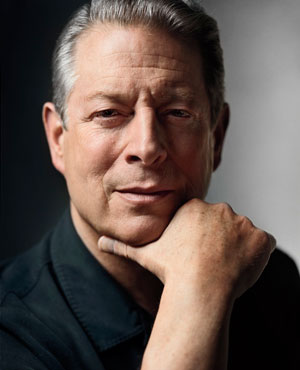 Back on the campaign trail, Al Gore is fighting a very different cause with the release of An Inconvenient Truth. He’s travelled the world with his slideshow presentation warning about the environmental disaster looming, and he spoke to Drew Turney via videoconference during the Sydney leg of his Australian publicity tour.

Is An Inconvenient Truth the first ad in your 2008 presidential election campaign?

No, I’ve been there and done that. I am involved in a campaign again, but it’s for a cause to change people’s minds about the climate crisis.

What if you win an Oscar?

I don’t think there’s a category for best slideshow presenter in a documentary but Davis Guggenheim and the producers deserve all the honour and glory that are due them. I don’t want to jinx their prospects for an award but they’ve done a great job.

What can each of us do to combat global warming?

We can all do more. I feel guilty not leaving the switch when I leave the room so we’re installing these sensors that pay attention when there’s no movement and switch the lights off. But there’s plenty of things we can all do – more efficient light bulbs, hybrid vehicles, environmentally friendly appliances and goods of all kinds.

And we can all be politically active to push for policies that make these changes easier. And it’s not as hard as it sounds – I think we’re getting to the point where communities and even nations are going to freeze their carbon levels and start reducing them soon after.

We’re getting close to a political tipping point where enough people care about it that they are going to demand politicians act. When that happens, we have everything we need to begin solving the crisis. So far the missing element is political will, and as I say in the movie that’s a renewable resource.

What do you say to the political leaders of Australia who seem reluctant to accept climate change as being real?

Australia and the US are the only two countries in the developed world that are turning their back on the efforts to solve this crisis. And Australia is in many ways the most vulnerable nation to the ravages of the climate crisis. You’ve developed an ingenious civilisation here in the driest of the inhabited continents. One of the most serious and earliest consequences of global warming is to suck moisture out of the soil and make dry areas even drier. You’re on the margin here in Australia as far as water is concerned. In the south west of Western Australia you’ve seen a steady decline in water supplies and availability, as predicted by the scientists who sketched the consequences of global warming.

And then you have large polluters who pay pseudo scientists to throw up a cloud of confusion so we think that should be given equal weight to what the entire world scientific community has been shouting from the rooftops.

Getting over the inertia and dealing with the truth of our situation is the moral challenge that we face.

We all know the US president is too close to the polluting industries. If you’d been president, would you have been able to speak out as much for the environment?

Yes I would have, but the receptivity of the US congress and the people of my country would be a challenge for whoever is president. When I was vice president I went to Kyoto and helped achieve the breakthrough there, but back in the US I couldn’t persuade the Senate to ratify it.

It’s partly because of that experience that I’ve devoted myself to trying to change the minds of people at the grassroots level so whoever is running for office will encounter voters who demand action.

Both Bush and Cheney have adopted the point of view of the oil and coal companies fully — not only that, they’ve adopted the least responsible among those companies, and that’s unfortunate.

But in our democracies, the special interest and the lobbyists have the ability to make policy only when the people pay less attention to what’s going on. When enough people feel strongly about the public interests, the special interests can’t work their will. That’s why building a critical mass of public awareness is the key step both in the US and Australia.

Why do the media and the public ignore global warming when it’s so serious?

First of all there’s a natural tendency to reject the notion that we have the capacity to cause so much damage to our planet. It’s relatively recent in our history — in less than 100 years we’ve quadrupled the population of this planet.

Now, we have a large effort by a small number of polluting companies who have adopted an immoral posture of putting their near term corporate interests above any other interests. They’ve spent millions in an intentional effort to confuse people to delay the formation of public consensus about the danger.

We need to reject the propaganda effort, connect the dots and act in our own self-interest.