Skip to content
November 1, 2001 in Desktop See more stories from this title 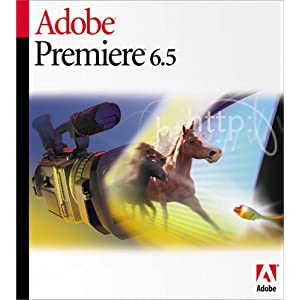 Making the transition from any kind of traditional design (be it print or web) to video editing is never going to be easy.

Whether you’ve spent your career learning about CMYK vs RGB and dpi vs lpi or .gif vs .jpg and .html vs .cfm, the leap from print to web (or vice versa) doesn’t involve a huge learning curve. As long as you have a mindset that can follow visual area, images and text, layout disciplines tread many of the same paths.

Moving picture and sound editing, however, requires a whole new mental approach — for one thing, you have to embrace a totally new dimension — that of time (that’s why the lynchpin of most animation and video editing software is a timeline).

You also need a decent handle on the idiosyncrasies of completely new file formats — from movie (.avi, .mpg, etc) to sound (.wav, .mp3, .aiff, etc), and which best to use for your purposes.

Adobe does the best they can of making the transition as easy as possible with Premiere 6.5, but there’s a big hurdle of foreknowledge ahead of you — don’t assume because you’re creative you’ll know your way around.

The work area is clean and well structured, but because of the nature of video editing it incorporates a lot of controls. If you come from a print or web layout field the sheer number of menus, windows, and tabs will make you wish you could do it all with scissors and sticky tape.

The basic elements are the timeline area, preview window, tab controls (that users of other Adobe products will be used to), and an elements window where you store all the clips, sound elements, titles and graphics you’ll use to put your movie together in folders called ‘bins’.

The easiest part of the process is getting the raw footage into the application. Premiere captures Digital Video straight from your device via Firewire, but if you’re working with analogue data you’ll need a compatible capture card (see below).

You can import several formats — even a whole folder at a time, which makes it easy to cut a whole movie without having to individually import dozens of clips, sound grabs or graphics.

The timeline is where the action takes place, and getting the hang of it with little editing experience takes a lot of practice as you experiment with altering your material one frame at a time, getting fades just right and adding sound.

A new and welcome addition for anyone who’s ever watched titles at the movies and said ‘I’d love to do that’ is the Title Designer. Virtually a separate application, it lets you create the sort of rolling or fading titles you see at the movies, and gives you the control designers are used to and will find welcome.

Once again, if you’re a designer it’s a little frustrating not to be able to import graphics into the titles — you’re constrained to pretty basic typefaces and styles (you can import some Illustrator or Photoshop files into the movie itself, just not the titles). But the text control is pretty comprehensive and Title Designer has the same graphic tools Illustrator users will feel comfortable with.

Just import a sample frame from the movie elements to use as a proportion and placement guide and unleash your imagination. The completed title then becomes another element in the project bin for inclusion in the movie.

Other new or improved additions are the stock audio tracks included with Premiere for use in your movies. They’re handy to play with and get a feel for what’s going on when you’re working with sound, but like most of the samples you get with professional software, they’re fairly cheesy and your average hard core Tarantino film student won’t find much use for them.

Mac users will be a little irritated by all the Windows-only extras, but the tools to perform those tasks are fairly prevalent in the Macintosh world, and Premiere offers compatibility with DVD Studio Pro and iDVD that’s pretty seamless.

The process of editing all your elements into a movie is deceptively simple. Separate streams of media (representing channels of sound and picture) are displayed in the timeline window, and you simply click and drag to move them around in relation to each other.

You can delve into increasing levels of complexity exploring the finer details of fading, changing clips or introducing music at just the right moment — the tools at your disposal to help you do this will make your head spin, but it gets easier with practice.

If your experience of video output formats extends to knowing the difference between RealPlayer streaming video and a downloadable Mpeg, both the setup and export options will trip you up, and once again, you’ll need prior knowledge that’s outside Premiere’s realm. You have to know what format you’re producing for as you’ll be prompted to specify it every time you set up a new movie. But once you know what you’re doing, it’s a snap producing movies for an impressive array of formats and players.

There’s a lot to know before you start editing video, and Adobe holds your hand as best as it can with Premiere, but when you understand what you’re doing, be prepared for the same rush you had when you saw your first web page on the Internet or received your first brochure back from the printer.

You’ll realise Steven Spielberg isn’t in trouble just yet, but it’s great fun knowing you can click and drag to create something in half an hour that used to take weeks of manhours and million dollar facilities.

Because of Premiere’s complexity, you’ll come close to falling for the old trap of thinking the computer does your imagining for you, but above all remember the old axiom — garbage in, garbage out.