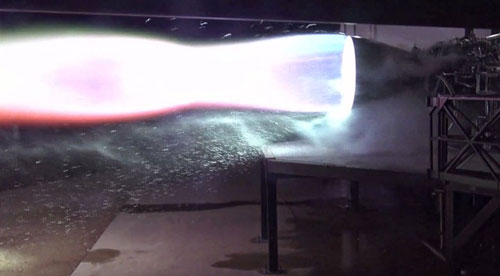 With the methane-driven Raptor engine, SpaceX is propelling spaceflight into a new age.

One of the most complicated elements of rocketry is the science of fuel propulsion, both in the chemical make-up of propellant and the engines that use it.

Since pre Nazi-era Germany, rocketry and space programs have undergone constant incremental shifts with the odd seismic change, and if SpaceX has anything to do with it, we might be in the midst of one of the biggest with the Raptor.

The Raptor family of rocket engines takes advantage of a fairly widespread move in the spaceflight industry to methane-based fuels instead of the traditional RP-1 mixture, the refined petroleum/kerosene and liquid oxygen used by (among others) the Saturn V used to carry Apollo 11 to the moon.

SpaceX’s previous and current flights are propelled by the Merlin or Kestrel engines, using the old-style fuel, but the methane/liquid oxygen (LOX) will have about twice the thrust of the Merlin 1D, which powers the company’s Falcon 9 craft today.

The Raptor aligns with SpaceX’s corporate philosophy of reuse, which has the potential to slash the cost of spaceflight. Different branches of the Raptor program are in the works, both for launch vehicles that will return to Earth and craft designed to go much further afield. The ITS launch vehicle, which the company concepted in 2016/2017 and which was retooled as the slightly smaller BFR (Big Falcon Rocket), is the craft designed to take colonists and cargo to Mars. At 118m tall and weighing over 4,000 tons, it’ll be driven by 42 Raptor engines, giving the whole mass a whopping 128 meganewtons(mN) of thrust.

As far back as 2012, the company was talking about how the forthcoming new design would launch payload masses to low Earth orbit of up to 200 tons – far exceeding the capabilities of NASA’s best effort at the time.

The Raptor is a multi-stage propulsion system, which means it will both lift rockets off the pad and drive subsequent stages outside the atmosphere. The thrust of the Raptor first announced in October 2013 was 2,900 kilonewtons (kN). A few months later SpaceX head of rocket development Tom Mueller said nine Raptor engines – which could now produce 4,400kN each – would potentially carry 100 tons of cargo to Mars, upping the ante in June 2014 by saying one Raptor would produce 6,900 kN of thrust at sea level and 8,200 kN in space..

CEO Elon Musk bought predictions down to Earth a bit in 2015 when he said the thrust would actually be around 2,300 kN, but it didn’t stop the US Air Force awarding SpaceX a US$33m contract to develop the engine for the Falcon 9 and Falcon Heavy (the company had asked the military if it was interested in methane-based fuel as far back as 2011).

Powered by subcooled liquid methane and subcooled liquid oxygen, the Raptor ignites and burns the fuel with more smarts than the open cycle gas generator system of older engines. Fuels are stored at near-freezing temperatures whereas RP-1 fuels are stored close to their boiling points, so methane fuel will make the storage engineering of the whole kit easier.

Subcooled propellants also means higher density in the tanks, so the craft can carry more fuel per unit of storage available. It’s easier on the pumps that squirt the mixture into the engines than hydrocarbon fuels, and it also doesn’t gum up the works with soot and coke that wear components down.

In fact, the Raptor’s design offers so many advantages your head will spin – some of them so arcane only an engineer could possibly get excited. It eliminates the seals on fuel/oxidiser turbines (a potential failure point), lowers pressure on the pump systems (increasing their lifespan) and raises the combustion chamber pressure (which increases performance). But one of the sexier benefits we can all understand is the amount of critical parts made by 3D printing, which compresses the years- or decades-long development times for spacecraft rocketry.

So far the Raptor is slated for use in several spacecraft, two of which will comprise the stages of the BFR. First will be the launcher, to be followed by either the interplanetary spaceship that will carry people and cargo into deep space or an orbiting tanker to transfer fuel to other craft.

But the USP of the company’s whole mission, of which the Raptor will play a critical part, is Mars. Like the 22-film Marvel Cinematic Universe that started with 2008’s Iron Man, Musk’s intention for SpaceX has always been the long game of sending humans across the void.

When he formally announced the company would be developing the methane-fuelled engine that would become the Raptor in 2012, it was with Mars colonies in mind. The Martian atmosphere is 95 percent carbon dioxide, and with water underground, a small chemical plant can produce all the methane humans on Mars could want – both as a fuel for warming and cooking in the colony and to produce enough fuel to get a rocket like the Falcon or BFR back home, further reducing the cost of mounting the mission in the first place.

Musk wants experimental flights in the air in 2020 or 2021, with a view to launch an unmanned cargo mission to Mars by 2022 – the travel time of which will be drastically shortened by the Raptor. After a further proof of concept sending a human crew around the moon in 2023, his globe-changing aspirations could come true with a manned Mars mission launching in 2024.

But of all the changes the Raptor represents, one the biggest is the fact that spaceflight is now a for-profit business rather than the geopolitical Cold War tub-thumping, with Blue Origin owner Jeff Bezos announcing his own Moon mission plans in May.

We’ll probably see the inevitable delays and failures that send SpaceX and their clients like NASA and the Air Force back to the drawing board, but when the first human being sets foot on the Red Planet, we might have an engine like the Raptor to thank.