Skip to content
July 29, 2003 in The West Australian See more stories from this title 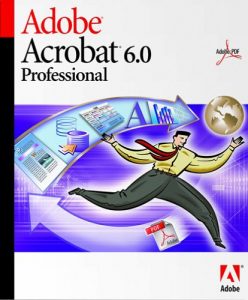 While certain software developers (Quark, we’re looking at you) rest on their laurels when it comes to software for the publishing and graphics industry, there are no flies on Adobe.

For a multinational software behemoth, they move remarkably fast, are remarkably responsive to the market and users, and they never seem to release new version of software without them being packed with tangible and welcome changes every time.

Acrobat 6.0 is no exception. Part of a new family of products that includes the lower-level Elements and Standard editions (along with the new improved Reader 6.0, available for free download), Acrobat 6.0 Professional has too many new, essential features to list.

Acrobat’s always done some cool things, but in the early days, we just wrote PDF files to email people to look at and that was really it — anything that needed changing you went back to your application to do.

But Acrobat 6.0 has grown up so much it’s performance can be summed up in one word; control. You don’t just write a PDF anymore (although it can stay that simple if you like), you’re in control of every aspect of output or production. Together with the new Reader, Adobe has produced a tighter, more efficient process that gives you far more freedom.

The lynchpin of PDF technology — sharing — gets several major boosts. In the past, your job options (the parameters of the output) file determined the finished result from behind the scenes. Sure you can email them to an output bureau or supplier, but now they can be embedded in the PDF itself — for anyone who needs them to extract and apply on their own system.

In fact, so much information can now travel with a single PDF it’s almost a mail system in itself — information that’s as much about what’s left out as left in. Using the validation feature, you can create files in the PDF/X standard — an assurance to your printer or bureau that it’s press ready.

Acrobat 6.0 also comes with its own preflight utility, and you can select from such a dizzying array of parameters (as well as modify and create your own) it renders old school stuff like Magpie and Flightcheck virtually obsolete. Plus, the file’s receiver can extract the preflight report and its parameters straight from the file for themselves.

The print window has been improved to the point it’s as comprehensive as the program you used to originally create your file. You can automatically add colour bars and trim marks to impress your bureau or output by greyscale, colour, RIP, or separations.

And before you even commit to a single printout, you can preview the overprint setup to make sure colours knock out correctly or turn separations or layers (yes, Acrobat supports its own layers) on or off the same way you do channels in Photoshop.

The new PDF optimisation feature makes it possible for PDF to improve on itself. Taking advantage of new techniques and standards like JPEG2000, an existing PDF can be made smaller and more efficient, concentrating on separate elements like images or fonts, or discarding comments or on-screen functions like hyperlinks. Just run the optimisation auditor to identify components to scale down, including backwards compatibility for older readers that don’t support the new standards.

Acrobat has always used a robust comments system, but it can get ridiculous when they’re passed back and forth by all and sundry. In an Acrobat 6.0 PDF, the comments can travel embedded as a separate file. It doesn’t even have to travel with the PDF — once received by you, a comment from someone else can find the original on your system and display everything on your PDF just like it had come down the wire as is.

The security capabilities (a handy feature if you deal with large amounts of emailing for comments or approvals) are even more elegant. Now you can add a watermark to guard against someone stealing the file, as well as specifying it to appear (for example) on print but not on screen.

Couple the major changes with a multitude of smaller add-ons (an on-screen ruler; ability to create a PDF straight from your scanner input; dragging and dropping your job options file onto Distiller to apply it; a zoom-and-pan tool), and Acrobat is a brand new product built on solid beginnings. It’ll give you a level of control over your design or production output you never realised you needed but you know you’ll never want to live without.