Skip to content
September 11, 2008 in Xpress See more stories from this title 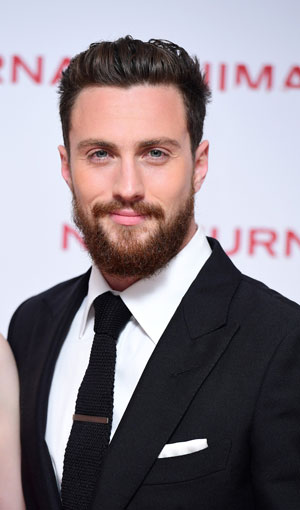 The British leading man whose star is set to rise takes it all with a grain of salt, as Drew Turney discovers.

“Gurinder makes you feel so comfortable it was never a problem. The only thing that I felt nervous about was whether she was taking the Mickey out of me saying ‘you’re a sex God in this’.”

That’s British heartthrob Aaron Johnson about director Gurinder Chadha, the helmer behind the 2002 hit Bend it Like Beckham. Johnson’s the romantic male lead in Chadha’s latest teen angst comedy Angus, Thongs and Perfect Snogging, and he reckons he’s far enough removed from the character he plays — Robbie — so that the ‘sex God’ role is complete fiction.

“I’m very different but there are parts of me that I brought to the character,” he says during Angus, Thongs whirlwind publicity tour in Sydney. “So it was really cool to play a laid back and natural character, but I don’t play the bass and I’m not in a rock band. I’m not your typical cool boy that Robbie is. He’s a caring and genuine guy so I brought that part of me to it. But I can be a bit crazy sometimes…”

Maybe it’s because Johnson doesn’t see himself in that mould that it’s not a direction he really wants to pursue. Best known for playing a young Ed Norton in 2006 magician drama The Illusionist (opposite his Angus, Thongs co-star Eleanor Tomlinson), his handful of screen credits have been for very different characters.

“It’s nice that [Angus, Thongs] has opened doors for me,” he says, “but I wouldn’t like to go down the route. It’s not where I want to go with my career because I like to be very versatile, that’s what I find more exciting, to play different characters. The next role I’m going onto is very, very different so I’m hoping that’s going to show I can change. So I don’t want to just stick to leading role, romantic leads.”

So the big question remains whether Johnson will crack the all-important US market? He already has a leading role in 2009 Nicolas Cage superhero comedy Kick Ass ? will that do it for the 18-year-old?

“That’s where a lot of the work and the market is but it’s not somewhere I want to live,” he says. “But there’s a big market for [Angus, Thongs] out there because that’s where most of the books the movie’s based on were being taken up. The American girls really like the British humour so it’ll eventually go out to America and I hope they enjoy it.”