Skip to content
January 30, 2011 in The West Australian See more stories from this title 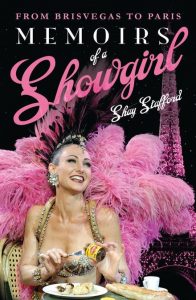 It’s sweet for a husband and wife to have his and hers bath robes or coffee mugs, but how cool is it to have his and hers book deals? That’s where authors Bryce Corbett and Shay Stafford find themselves after the recent release of Shay’s book, which followed Bryce’s memoirs in 2008’s A Town Like Paris.

You’d think such an achievement would be adventure enough for a married couple who now make their lives in Sydney’s eastern suburbs, but it’s the lives they led that convinced Corbett and Stafford to put pen to paper that read like the stuff of dreams.

Corbett, a Sydney-born journalist in an unfulfilling job in London, answered a job ad on a whim for a communications officer at the International Chamber of Commerce based in Paris. After unexpectedly getting the job, he moved to the French capital and led the high life, a very cushy job by day and a carefree bachelor’s existence by night in some of Paris’ most chic corners.

Brisbane-born Stafford has an even more incredible tale. After a love of dance as a child and a gig at the Jupiter’s Casino cabaret show, she never forgot her dream of dancing at the Lido, Paris’ most iconic showgirl revue. She traveled to France to audition for the Moulin Rouge after further stints as a resort dancer in Japan and Kuala Lumpur and never looked back. Stafford spent 12 years there, at the Moulin Rouge and in her dream role at the Lido where she rose to the rank of principal, retiring from dancing in 2009.

The tale of her adventures is told in Memoirs of a Showgirl, where she recalls the romance, trials and tribulations, love affairs and cityscapes that continue to make Paris a source of fascination and inspiration for Australian travelers.

But the most surprising part of both Corbett’s and Stafford’s stories is that after tasting the delights of France (complete with ‘brooding, smoking artist boyfriends’, as Stafford puts it), the two met at an Australian consular function, growing closer over time, falling in love and returning home to marry in Byron Bay.

The former showgirl and mother of two laughs over the phone from her Sydney home when The West asks if going all the way to Paris to fall for another Aussie felt strange.

“Not at all,” Stafford says, “I’d had the French boyfriends like plenty of Aussie girls want to go over there and do. It was extremely charming but after a few years the drama just wore thin.” (Corbett and Stafford both talk about the particular French male predilection for dramatic expressions of love – promising everlasting devotion after one drink, outright stalking, threats of suicide in the face of crushing heartbreak, etc).

“Eventually I just wanted someone who would laugh and who got me. Bryce and I just clicked. I lived in France for 12 years and he lived there for 10, so we’re both a little bit French and it’s made it easier for me back here because we’re both missing the same things together.”

But life in France wasn’t all champagne and soirees with Leonardo DiCaprio. Two very physical shows a night six nights of the week is extremely hard work, and it’s made harder by plastering on a smile and looking like you’re loving every minute even when the rest of your life is falling in a heap.

In fact she thinks the demands go some way to explaining the disproportionate number of Australians dancing in Paris cabarets. Apart from the physical necessity of being particularly tall — which graces Australians more than our European cousins — Stafford thinks we have a natural enthusiasm.

“There are some French girls there but they’re definitely not the majority. Australian girls stay for longer because they’ve invested so much to move over there and set up a life on the other side of the world. Some of the best dancers there were French, but Australian girls have something special on stage. We have a certain energy and we’re very dynamic. It’s quite easy to pick an Aussie on stage.”

So finally, we come to the big question as delicately as we can. You move to Paris with the intention of winning a role in a revue where you’re going to be parading topless in front of hundreds of strangers. You know your parents are going to come and see you perform. Doesn’t it then start to feel really weird?

“I understand a lot of people have a hard time getting their head around the concept,” she says, “and I was nervous about my parents seeing me perform topless because they’d never seen a show like that. But they did come to Paris to see me perform the principal role in the Moulin Rouge, so they saw it all in context. It made perfect sense and they were enormously proud because there was their little girl on stage. It’s also about the work that goes into it, a team of people behind the scenes to give you a certain look and a character, so I think of it more like an acting role for me.”

By the time her parents did see her perform, Stafford says she was comfortable with the scanty costumes firstly because it was just another day at the office, and secondly because France has a liberal streak most definitely not found in Australia, but one that rubbed off on her. “I was nervous when I first started but I knew if I wanted to be a soloist I’d had to dance topless and I was very motivated. After being in France for a couple of weeks I realised Parisians are certainly more liberal and nudity isn’t an issue for them. I mean, you see women’s breasts advertising yoghurt!”