Skip to content
October 9, 2008 in Xpress See more stories from this title 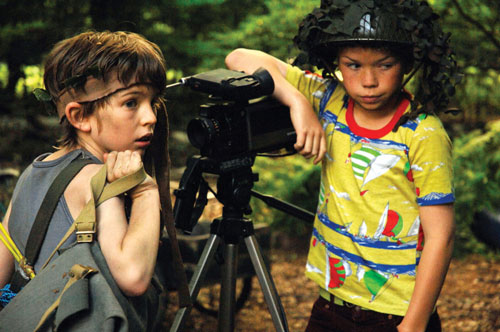 There’s a well-worn path to Hollywood stardom for many directors. Make an award winning short, get some attention through a festival, move into TV ads or music videos, get an investor or film funding body to finance the small, personal project that makes little money but showcases your talents and wait for The Call.

Apparently nobody told 35-year-old Essex born filmmaker Garth Jennings that’s the way it’s done in Hollywood. With producing partner Nick Goldsmith, Jennings found himself holding the megaphone on one of 2005’s most anticipated films, Disney’s The Hitch Hiker’s Guide to the Galaxy. His next project, Son of Rambow is a much smaller, less ambitious, more heartfelt effort. It’s the sort of passion project that would usually precede a huge studio film, not the other way around.

“We didn’t know we were doing that at the time,” Jennings says when asked if the order of events felt strange. “We just thought ‘let’s make Hitchhiker’s Guide to the Galaxy and afterwards go back to Son of Rambow’, which we still really wanted to make.

“We started writing Son of Rambow eight years ago and never expected to be doing any great big Hollywood movies. But just as we got the script finished and begun the casting and financing process, we were offered Hitchhiker’s ? which we grew up loving — so it was obvious Son of Rambow should wait because Hitchhikers was an opportunity not to be missed.”

The two films are so different on screen it’s easy to assume the experience behind the camera were similarly so, but the former music video director says Disney was surprisingly hands-off, a situation that meant Rambow didn’t feel altogether different than Hitchhikers’ had been.

“First of all [Hitchhikers’] was a $60 million budget and Son of Rambow wasn’t going to cost us even a fraction of that,” Jennings explains, “but we started to realise while budgets are fairly abstract the day-to-day business of filmmaking is much the same, it’s just the catering that improves I suppose. But it was great once we finished Hitchhiker’s because we read Son of Rambow again and felt just as passionate about it, so it was great to get back to it.

“I know it’s not the norm but [Disney] said right at the beginning they wanted it to feel like an import, like fans had made it. They came to the set only once in the 17-week shoot, they were very confident in it and I supposed we looked like we knew what we were doing.

Son of Rambow is another film for the strange and small genre of films about the love of cinema. Schoolboy Will (Bill Milner) is part of a repressive religious denomination in suburban Britain of the early 80s where he’s forbidden to watch TV or movies. When he falls in with school misfit and prankster Lee (Will Poulter) and sees a pirate copy of Sylvester Stallone’s First Blood, he’s hooked, he and Lee making the erstwhile sequel of the title with a style all its own.

A comic and dramatic action film starring two small English boys doesn’t sound a lot like Giueseppe Tornatore’s much-loved 1988 classic Cinema Paradiso. Was Jennings aware he’d be joining such auspicious company with other films about how the movies can so completely seduce us, especially as children?

“It’s funny, I don’t think I had that in mind,” Jennings wondered, “even though I loved that film and lots of other films like it that celebrate movies. But a lot just seeps into your brain and unconsciously inspires you, I suppose. One of the things we were trying to get across was to capture how things felt to us at that age. It’s a lot of stuff you can’t help but bring back from your own experiences in childhood. All sorts of things came through that weren’t conscious, lots of things came out of the writing that I hadn’t anticipated but you just get a gut feeling of what’s right for the story.”

So with Hollywood already conquered and now an arthouse smash under his belt, it looks like Son of Rambow won’t be the last story we see from Garth Jennings.