Skip to content
September 12, 2017 in Moviehole See more stories from this title 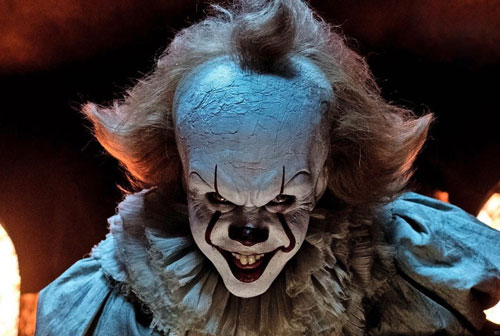 Right now, it’s good to be Andrés (Andy) Muschietti. After breaking out with 2013 hit Mama, the filmmaker has been handed the keys to one of the most anticipated horror properties around: the big screen redux of Stephen King’s immortal It.

After more than a decade of studio and creative wrangling that saw True Detective director Cary Fukunaga develop the project and then jump ship, Muschietti inherited and reworked It to tell the story of the young iteration of The Losers, the young friends in small town Maine who discover that a series of disappearances in town are the work of an evil supernatural entity who presents itself as a clown (the gang battling It as adults – as depicted in King’s novel – will be the subject of the film’s sequel).

Muschietti himself insists he’s not scared of clowns, which fails to explain why he’s given us the scariest of scary clowns since Tim Curry first played the role of Pennywise on TV in 1990.

But Hollywood is already betting big on the 44-year-old filmmaker. Prior to coming aboard It, he was hired by Brad Pitt’s production company to develop and helm The Jaunt, another Stephen King tale. He’s signed on to direct the big screen adaptation of cult TV anime franchise Robotech, and It tracking bigger than most films after the carnage of this summer’s box office (projected at a $50m opening).

During the interview, Muschietti’s longtime producing partner, sister Barbara, confirms that offers from some of the biggest franchises around have already come in, so it seems the latest South American horror maestro to conquer Hollywood is on the ascent.

He spoke to Playboy in Los Angeles in the postproduction offices of Warner Bros Burbank lot where he and his team were putting the finishing touches on the edit, and the laid back Argentine seems to be taking it all in his stride.

So the slide projector scare got the biggest scream in our screening.

We were showing it to the actor we wanted to play Beverly in a private screening. She was drinking wine and spilled it all over herself.

Did you have to forget about the expectations and pressure of what everyone was hoping for from It?

The expectations of the audience was something from later in the whole process. I never felt a real pressure about that, it was more like excitement. It was exciting to listen to what people were expecting but it wasn’t the main driving force for me.

Did your feeling about the movie change when the teaser was so successful because you realized how many people were looking forward to it?

No, I was thrilled about the response of the audience. It was nothing like what we expected. That only made me more excited about it. Of course there was some pressure, like inside pressure, to make a good movie and a movie that I would like to see. That’s probably the hardest part, surprising yourself.

There’s a strong history recently of directors doing a well-received horror film with a lean budget and then moving into the big leagues and being offered Marvel or Star Wars films. How does it feel now? It is blowing up and you’re getting those kind of offers?

When you jump into a very big movie some of your artistic input gets sort of suppressed and it’s not what I want for my life as an artist. Making a movie of this kind of budget gives you more liberty. I would say the smaller the budget, the more liberty you have, but of course then the more limitations you have, so it’s a bit of a balancing act. When you jump into a big, big franchise, the chances are you have to bow to pre-existing artistic concepts.

The reasons they bring you in, if you’ve made a movie that is successful not only for the box office but critically, is because you can bring the compelling dramatic elements and the emotional engagement with the audience. That’s something that for me is essential in any kind of story. That’s why if I’m offered a DC or Marvel movie or something, I’d have a condition of having that emotional connection with the audience because, otherwise, I’m not interested in telling a story at all.

But you’re conscious you’d be giving up some creative freedom if that happened.

Yeah, creative freedom and the chance to make a compelling emotional connection with the audience. It’s the first thing you need for a movie to work whether it’s an action movie or a horror or a comedy. If you’re not engaged emotionally the movie doesn’t work, and I get so bored with these big movies that are designed to please everyone and don’t please anybody. All the supposedly emotional connection is so artificial. I want to be moved myself, first.

So has It given you an idea of the size of budgetary sandbox you want to play in?

Well, it’s not about size, it’s about the project. We could easily go back to a smaller movie like Mama as long as we believe in it and had artistic control over it.

What kind of relationship do you have with the 1990 miniseries?

I wasn’t so impressed by the movie. I wasn’t a kid anymore so I wasn’t very impressed. For a horror movie, it was pretty bad even though Tim Curry was fantastic. They probably did a better job than what the idea was. Not the idea of It but the concept of what a cheap TV miniseries was.

How hard was it to find the right Pennywise, considering Tim Curry’s performance is still so indelible [Muschietti’s Pennywise is played by Atomic Blonde’s Bill Skarsgård]?

Well you see a lot of actors and unfortunately you have to discard a lot. So it wasn’t easy but along came Mr. Bill Skarsgård, who immediately caught my attention.

He had this particular thing. All through the process of trying to reinvent this I was thinking about Pennywise being a little bit of a childlike character. And Bill had it because depending on the angle he can be like a sweet, childlike It but there’s something very mad about him, in his eyes. He can turn into a demon just like that.

So he had the perfect balance, at least physically, and his performance brought something great to the equation. There was some madness and instability that blended so much to what I wanted to do, which was make an unpredictable monster. Mainly we both wanted to make something that wasn’t expected for the audience and still maintain the essence of the character in the book, and Bill was just perfect for that. He was actually the last official hire.

You didn’t try to do anything outlandish with the clown design either, but he’s still great.

There was a part of me that wanted to make something new and the other part of me hated the classic Bozo clown, I really didn’t know how to make that scary, even though people are naturally scared of that. So the ‘scary’ came from something that is ancient and childish and childlike. Something’s off and you can’t figure out what it is.

There’s a quote in the book where they’re speculating about who this monster is. They have no idea so they read up and come to the conclusion that he’s a Glamour, which is a shape-shifting monster that is present in a lot of different cultures. But they come to a dead end and Bill Denborough says, “Maybe It eats children because that’s what we’re told monsters do.”

That tiny phrase can go unnoticed unless you really think of it and it stuck with me. What if this creature is something that is alive and real but only because of the imaginations of our children?