Skip to content
September 17, 2015 in The Sydney Morning Herald See more stories from this title 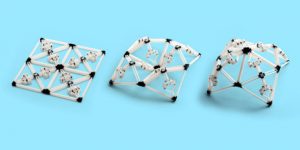 A biomedical valve made in Wollongong that opens and closes in response to the temperature of the liquid it is in holds great promise.

A medical breakthrough in Australia might represent the first big step in a new materials science, 4D printing.

No, that’s not a misprint. You’ve heard of 3D printing – also called “additive” manufacturing – where a device not unlike an inkjet printer builds an object by adding successive layers. It’s been done on everything from polymer-plastic desk toys to metallic alloys for spare parts and even human tissues.

4D printing, as the name suggests, refers to a 3D printed object with the fourth dimension – time – built in, where the final result can change form according to the specific conditions it finds itself in. Professor Marc in het Panhuis, of Wollongong University’s Australian Research Council Centre of Excellence for Electromaterials Science (ACES), is leading a team that’s introducing the concept to the world of biotechnology.

“A lot of people ask me where they can buy a 4D printer,” in het Panhuis laughed. “But it’s a process rather than an actual printer. What we do is make 3D structures that change over time into another structure. Add a dimension to 3D and you get four. A lot of people find that very confusing, and it is a bit, but the name has stuck.”