Skip to content
April 27, 2014 in The Australian See more stories from this title 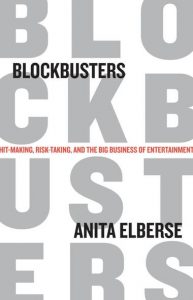 Steven Spielberg and George Lucas famously said in 2013 that Hollywood was headed for an ‘implosion’. The failure of only a handful of the giant, expensive blockbuster movies, they said, would prompt an industry collapse.

A professor at Harvard Business School, Elberse has spent years embedded in entertainment, sports, publishing and similar industries, talking to insiders and collecting the facts she uses to make her case.

She contends that the increasingly risky sums of money spent on today’s big media ventures makes sense, a point the facts make it hard to dispute. Using examples like Lebron James, Lady Gaga and The Dark Knight trilogy, Blockbusters deconstructs the economics behind what she calls the ‘blockbuster strategy’ and finds evidence that you’re better off making as big a splash as possible in the media landscape.

It’s the first piece of accepted wisdom Elberse flouts. You often hear Hollywood people complain about rising costs and avoiding risk, but each year they seem to spend another hundred million dollars on every new big movie. What nobody seems to admit out loud is that, quite simply, spending more money works. ‘Blockbusters will become more – not less – relevant to popular culture,’ Elberse writes, ‘and blockbuster strategies will thrive.’

The book goes on to explain why the blockbuster strategy endures by talking about how to launch one, the merits of using stars in movies or product endorsements and how technology will change the paradigm.

It deals with timely subject matter today not just because entertainment properties are growing larger, but because the media landscape is morphing. While many have declared the end of big media because of direct-to-consumer models and the new channels that can market them, Blockbusters’ findings seem to disprove such trendy thinking.

As Elberse points out, there have certainly been YouTube and Twitter stars, but the playing field is still far from level, as the success stories in Blockbusters explains. Driven by experienced practitioners and established supply chains, the media industry offers a product ‘pipeline’ the likes of which artists (or inventors, engineers or sportspeople) struggling on their own simply can’t wield no matter how many Twitter followers they have.

Though not quite as simple, the takeaway might be that you have to spend money to make money. With Horn’s strategy still in place at Warner Bros as recently as 2010, Blockbusters reports that ‘although the top three biggest bets only accounted for a third of the total production budget, they were responsible for … 50 percent of the worldwide box-office revenues generated that year.’ Indeed, 60 percent of the studio’s profits between 2007 and 2011 came from just three movies – Harry Potter and the Deathly Hallows Parts 1 and 2 and The Dark Knight.

It’s a fascinating world where the business is quite decoupled from the artistic performance or achievement of the product. After the huge sums of money Spanish soccer team Real Madrid paid for star players like David Beckham, the team didn’t win many more trophies than it ever had – but it enjoyed unheard-of revenue growth thanks to product endorsements and merchandise.

The blockbuster strategy itself has also evolved with the times. You might have read stories about how A-list salaries grew to ridiculous proportions in the late 1990s, but just because Hollywood’s fallen out of love with movie stars doesn’t mean it’s not still betting big. Hundreds of millions were spent on Harry Potter and Spider-man movies because the brand is the true star. It’s the selling point – not the strategy – that’s changed.

Some readers expecting the pizzazz the title seems to promise might be disappointed. Blockbusters is a business book, and Elberse is an academic and not a poet, so some of the prose might leave you slightly cold. And if you love movies, sports or literature but think big business is sucking the creative lifeblood out of them, Blockbusters will also be depressing reading as it seems to assure you there’s no end in sight.

In short, it’s all about how the spectre of more expensive failure is causing upward spending pressure on launching products. As Elberse writes; ‘one way content producers can react to this new reality is by doubling down on blockbuster investments and focusing even less on smaller bets’.

Welcome to the new world, where your superhero movies and top forty albums will only get bigger.