Skip to content
December 4, 2011 in The Sun Herald See more stories from this title 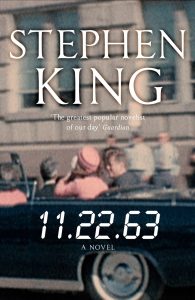 You might not think Stephen King is the greatest writer in the world, but here’s what he does well, if nothing else. When you pick up 11.22.63 (another doorstop the size of It and The Stand) you might emit a small groan about how long it will probably take to get through it.

But at the end of the first sitting you’ll find yourself several hundred pages in, then a few hundred more, and as you get closer to the end you’ll suffer a few late nights and be late for a few appointments. As in all King’s books, he somehow — without any particular literary flourish — funnels you through the story as surely as he does one of his unwitting characters.

Hallmarks from his usual stock of devices are solidly accounted for. He often casts secondary characters who communicate in down-home, small-town homilies that belong in another era and 11.22.63 is full of them. Because this time, instead of harking lovingly back to a nebulous mid-20th century he reveres in his locations and dialogue, King sets the story there.

High school teacher Jake learns of a strange phenomenon that can send him back to the year 1958. The short order cook who brings him in on the secret reveals the mission he started that he expects Jake to fulfill — prevent the assassination of John F Kennedy on the date that gives the book its title.

Just like his vampire novel (Salem’s Lot) and his zombie novel (Cell), it’s thrilling to see how King ‘does’ another common literary trope like time travel. He’s never been as interested in narrative entangling as he has in putting ordinary people in extraordinary circumstances, so he doesn’t spend a long time on the vagaries of time travel paradoxes as he does on the story of a man lost but trying to belong.

Jake decides to test the hypothesis of changing the past on the kindly and disabled school janitor, leaving King to devote the entire first third of 11.22.63 to a dry run in Derry, the Maine setting of It (including a callback to two of It’s characters that starts out cute but ultimately overstays its welcome).

When Jake returns to the past for another try, you can see why 11.22.63 is so big. King doesn’t usually include a single line that isn’t crucial to the story but here he goes on holiday, ambling along with Jake making his way to Texas to set himself up in a false life and prepare for Kennedy’s Dallas visit a few years later.

It’s the first time in King’s whole body of work you could skip several chapters (almost 100 pages) and not miss anything essential. The entire trip from Maine to Texas comprises little more than world building until Jake arrives and prepares for his quest. It’s over halfway before he even lays eyes on his target – Lee Harvey Oswald.

As always, some of the relationships are a little folksy to feel real, bordering on sentimental silliness several times. The length and the structure almost make you think King envisioned a TV show out of the whole thing, but in the end 11.22.63 might be plain old wish fulfillment. Apart from a few short stories King’s never seemed comfortable in the modern world of iPods and WiFi. Instead of looking back to the past that was so formative for him, this time he’s simply gone there.

It’s not his magnum opus — Duma Key is still his best recent book — but even King’s second best stands head and shoulders above most.